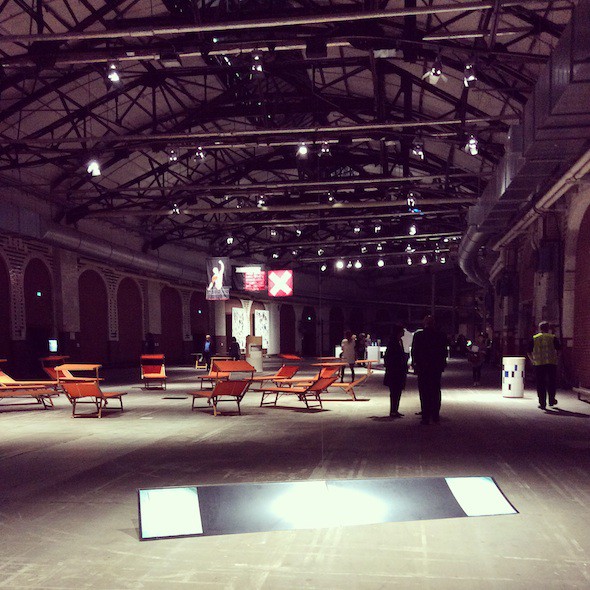 
The abc art berlin contemporary fair seems to improve with every year, rather than stagnating in an immutable form like similar platforms tend to do. The traditional fair booth leaves little room for experimentation but I was impressed to see some important changes at abc this year. For the first time, the architectural concept was developed by June14 Meyer-Grohbrügge & Chermayeff. Their proposal for the organisation of the halls consists of spaces defined only by their corners. As a result, the fair was not as densely packed with booth walls as in previous years, and the whole ‘C’ wing of the venue was given over to a group exhibition titled Proximities and Desires. The addition of an exhibition area into the fair was a breath of fresh air, and a welcome conclusion to the typical circulation of the space. The pieces included in the show were donated by private and public collections, such as the Boros Collection, as well as local archives, and thus reflected a wide spectrum of international talent. An opening video, from 1974, by Cuban American artist Ana Mendieta sets the tone: she lies naked, facedown in a stream, writhing slightly in a sensuous communion with the earth. The desires depicted in the exhibition are as wide ranging as the artists, with works by contemporary political artist collective Chto Delat? and an anonymous 6th Century sculpture ‘Head of a King.’

Other exciting additions included the representation of less conventional gallery spaces, such as Société Berlin, who took the commercial impetus of the fair to its logical conclusion, opening up shop with their publishing house ‘Edition Société’ and boldly selling art books and merchandise from the booth. Local radio station Berlin Community Radio also cleverly repurposed the guard booths at the entrance to STATION Berlin as a functioning studio satellite, from which they’re live broadcasting a full program of music, performance and criticism throughout the fair. 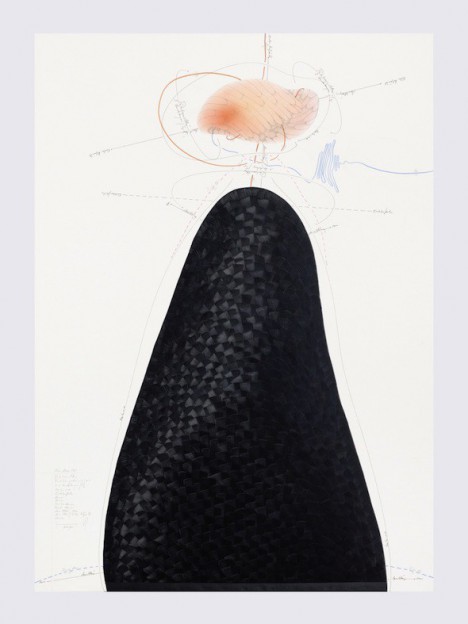 In the nitty gritty of the fair itself, a few booths stood out for their high quality presentations. Jorinde Voigt‘s spacey, amorphous paintings take the prize for grandeur, occupying the area of four booths together (based on the architects’ allotment of corner sections only). The display is typical ofKönig Galerie, which is used to showing in the imposing interior of the former St. Agnes church. Voigt’s works are subtle despite the volume of their exhibition and exude a style reminiscent of abstract storybook illustrations in progress, make believe worlds being carefully measured by an imaginary architect.

Just on the other side of König’s booth wall, Yngve Holen‘s ‘Extended Operations XWB’ (2014) installation focusses on research into aerospace engineering, featuring a printed interview with an airplane pilot, colourfully punctuated with witty hashtags throughout: for example the response to a question about whether the pilot eats regular or special in-flight food while working is concluded with #packedlunch. A series of sculptures lie as if on stretchers in front of the interview. Holen put pieces of meat from a Berlin butcher through a 3D printer to generate data which was then used as a structural design. The objects were then carved using a CNC machine. The final products are meant to reflect the interchangeability of the virtual and the physical in contemporary digital society. 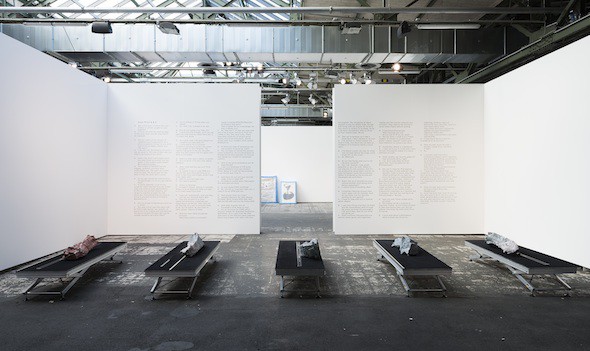 On a similar note, Constant Dullaart presents a version of his 2013 piece ‘Jennifer in Paradise’ at the Future Gallery booth this year. The image that Dullaart reproduces here is allegedly “the first photograph ever photoshopped”. The photo originates from 1988 and was photoshopped by John Knoll, using the now ubiquitous photo manipulation tool. The photo takes on multiple forms in Dullaart’s work, and has become a stand-in for many questions he explores in his practice, about software politics, net security, and distribution. 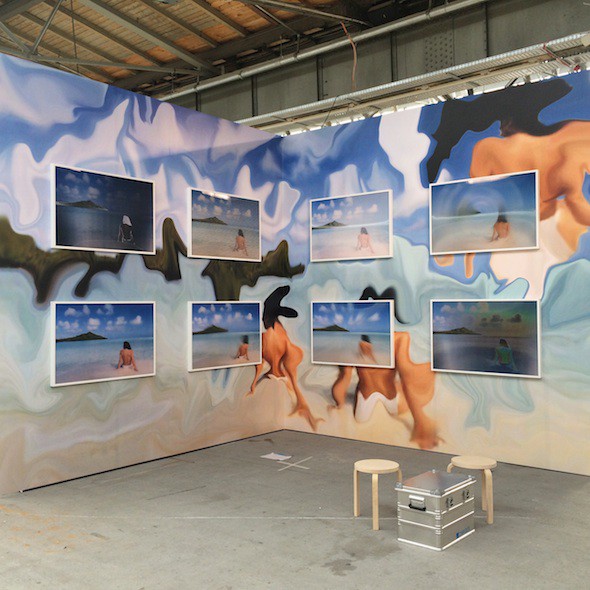 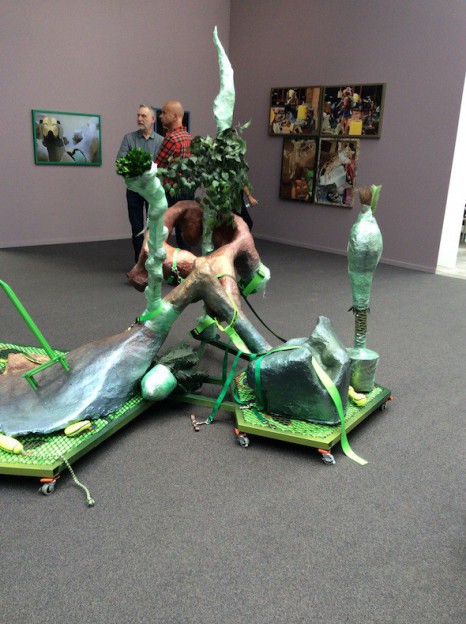 Lizzie Fitch and Ryan Trecartin are represented by Sprüth Magers this year, after their critically polarizing show at KW Institute last year (promoted only under Trecartin’s name). The pair have become cult favourites among the post-internet crowd, their work often making use of widely available editing software in a construction of different characters and roles. For Sprüth Magers, they show a swamp monster-type stage set element, surrounded by series of ‘behind-the-scenes’ style photographs. If you’re familiar with their video work, the photos will jog memories of cleverly lewd mashups of pop TV and internet culture critique.

Finally, in one corner of the fair, a high density of disparate sculptural installation works make up an unexpected architectural body. A small fence, like a shrunken version of the kind surrounding a typical American front yard, beckons visitors to enter; it’s an obstacle placed between us and the quite small images (mounted on a larger image) by Lada Nakonechna. The small gated fence is on wheels, presenting three options to visitors: to move the fence if they dare, to enter it, or to remain on the periphery. Next to this work, Marlena Kudlicka‘s sculptures continue the construction theme. ‘Shape hypothesis test B’ (2015) appears as if a banal technical drawing has come to life in vertical 3D, still labelled with construction notes from the draftsman. Nearby, Björn Dahlem‘s ‘Wolke’ sculpture hangs from the ceiling like a chandelier overseeing the construction site. The vicinity is rich with puzzling materials and designs and shouldn’t be missed. 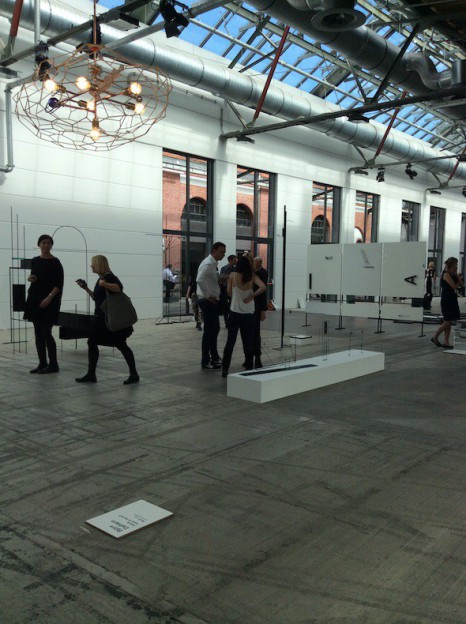