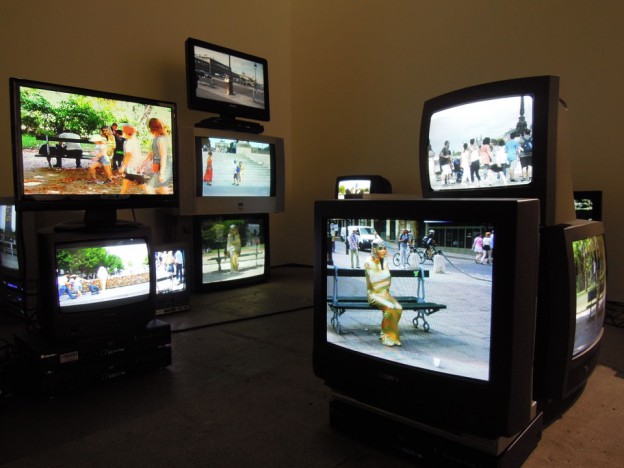 While the new architecture concept by June14 adds to a more booth-like feeling than in the years before, abc has sticked to its original approach, which is to use the space for more or less curated solo-presentations by artists rather than a best-of selection by each participating gallery. And it looks like it payed off, the fair closing its doors on Sunday with 30.000 visitors and happy gallerists, who often seem to see abc as a chance to introduce new artists to a broader public.

Between big and established names like Gert & Uwe Tobias, Pae White, Jorinde Voigt and Ai Weiwei, it’s nice to spot a lot of young, up and coming artists (and galleries) who haven’t been shown all over the place before. I nearly oversaw the entertaining 8-channel video installation Movements by Li Ming, brought to Berlin by Shanghai’s Antenna Space, in which the artists is on a mission to make his way from A to B by jumping from one vehicle on- or into another, swiftly moving forward but never reaching a destination. By looping the videos not chronologically but with little time-lapses in between, one loses track of whether it is just an endless repetition or an actual journey.

Talking about movement over time: Berlin based artist Felix Kiessling leaves his Zeitzeichnungen (Time Drawings) to a self-drawing-apparatus, consisting of a clockwork with a piece of graphite attached to the seconds hand, drawing a circle on a piece of paper. When the graphite is used up after 2 months, the clockwork will have produced a drawing showing every slightest change in the surrounding of the sculpture through little jags in the otherwise perfect circle, be it by people moving around it at the fair or all kinds of vibrations in the studio. A minimalistic setup and simple idea to answer the ever persisting question of how to record time. 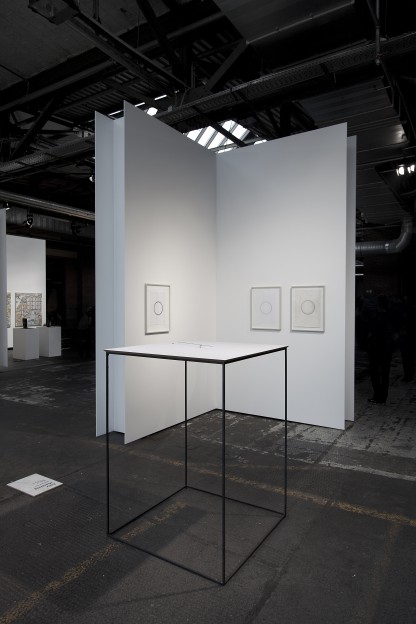 Kiessling’s fellow artist and student in Olafur Eliasson’s ‚Institut für Raumexperimente‘, Julian Charrière, presented his thoughts on the conception of time and eternity in an elaborate and alluring installation somewhat between the model for a sci-fi movie and reminiscences taken from a Natural History Museum. His array of cryopreserved succulents – plants which haven’t further developed their DNA since the Cretaceous age – in a glowing clinical vitrine cooled down to –18 degrees creates a trans-temporal space, a futuristic archive of something prehistoric. Driven by the question of why we are so attracted to tropical and other non-native plants and use those to decorate our homes instead of worshipping what’s growing on the lawn in front of us, Julian Charrière finds the clue in the fact that, in the end, we all descend from prehistoric organisms.

On the other side of the wall, Ukrainian artist Lada Nakonechna presented an installation on exactly this: being on either side of a wall, or a fence in that case. The corner assigned to EIGEN + ART was taken up completely by a black metal fence on rollers, with a gate opening to the side opposite the back wall which where small framed drawings where hung on a blurred blown up picture. In order to view the works on the wall, one could either open the gate and walk into the fence or try to squeeze in between the metal bars and the wall, either way, one has to take a decision. Standing inside the fence, one is all of a sudden separated from everybody else, but with the privilege of being able to read what’s on the wall. For Lada Nakonechna, who lives in the Ukraine but often works and exhibits in the EU, crossing boarders and migrating are crucial to her work and her own biography. 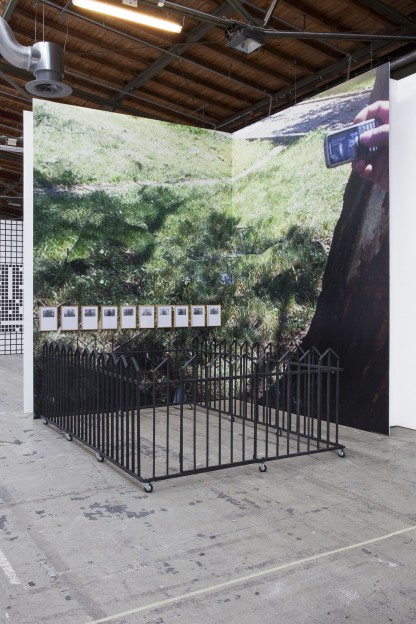 A real highlight among visitors was Tobias Dostal’s magical cabinet aka. the booth of Berlin based gallery KWADRAT. Being a hobby magician since he was a teenager, Tobias Dostal combines his know-how of all things magic and illusional with a strong fascination for the early days of film, when people were literally shocked by images suddenly moving and ran out of the cinemas screaming. Tobias Dostal’s chamber of illusions was truly captivating and refreshingly different with its melange between nostalgia and high-tech. Don’t we all love to feel like kids again and marvel at something which we don’t understand, like the installation of two projectors constructed in one, causing an endless loop of fantastic images projected from two sides on a swirling invisible screen. Turns out it is made of 4 rotating feathers which move so fast, and too fast for the eye to catch, that they form a white mini-screen on which the stories of two films merge into one. 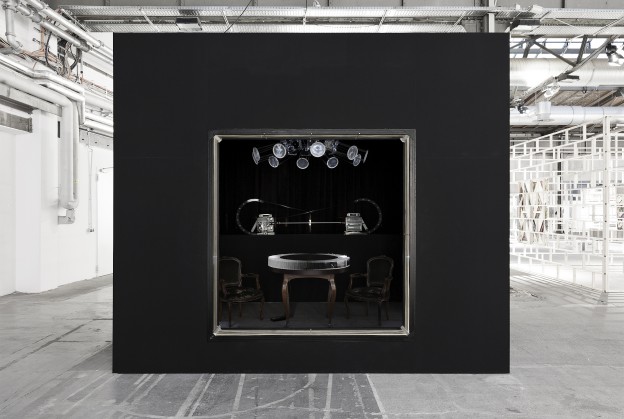 Another discovery were Thomas Geiger’s TV stacks at Sperling from Munich, which couldn’t hide their worship of the pioneer of video art, Nam June Paik. As a current artist in residence at Cité des Arts in Paris, Thomas Geiger was intrigued by the golden Pharaos, a newer species of those living sculptures that can be found in any bigger touristy city around the world, usually remaining still for hours in arduous poses and time-consuming costumes and make-up. The golden Pharaos in Paris seem to take it quite easy, sitting comfortably on benches and bridges, a side from the fact that they are unable to move due to their arms and legs being wrapped in golden fabric. When talking to a few of them, Thomas Geiger found out that hidden under the shiny masks and attire are beggars and homeless people, who had discovered that their daily earnings could easily be raised by dressing up like this. The artist filmed tourists and passers-by who sat next to the Pharaos, eventually placing their arms around them or clapping them on the shoulders. Would they act the same if the person was sitting there without a costume? Le Pharaon Doré is quite symbolic for a city like Paris, a dazzling and glitzy outer shell which hides its roughness and poverty underneath. All that glitters is not gold, what an apposite work for an art fair!