Spiros Hadjidjanos is one of those artists who manage to permanently work around the same themes, without ever failing to present them in innovative formats. In his case, it is digital media and its different manifestations. And so, for this year’s abc, his gallery with the meaningful name Future Gallery will be showing a network sculpture, 3D prints, a transparent futuristic video screen and a computer keyboard sculpture. 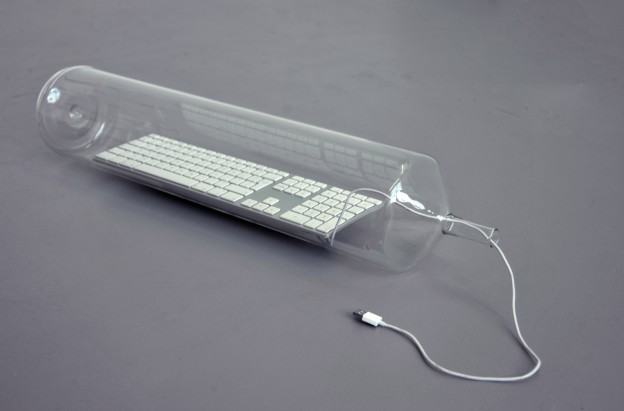 Hadjidjanos’ computer keyboard sculpture is a contemporary version of a ship in a bottle, about which you wonder how it ever got in there: an Apple keyboard encapsulated in glass. Its USB-cable runs through the bottle opening, so theoretically, you could still connect it to a computer, but no hands will ever touch it again without breaking the glass. A useless, decorative object, a luxurious version of planned obsolescence. Rather useful, and aesthetic at the same time, is Hadjidjanos’ “Network Sculpture”: Eight strong aluminium wires mimic a DNA double helix form and are framed by Ethernet cables. But instead of the essence of biological life, this double helix carries the essence of our work life and contemporary communication: the internet; 0 and 1 instead of AGCT. As a matter of fact during the course of the abc the “Network Sculpture” will be part of the fair’s internet infrastructure.

At the booth, there will also be 3D prints of Karl Blossfeldts famous pictures from the beginning of the 20th century and a HD video on a transparent screen, immersed in to the fair architecture. Are you ready for the future?

In individual tours, NICHE Berlin guides visitors through abc – with a focus on the

conveyance of contexts as well as the opening of new perspectives. Beginning every day at

1, 3 and 5 pm, the tours can be booked at guides@artberlincontemporary.com, for 5 euro per

person. Guided group tours for up to 10 persons can be booked for 75 euro.

Courtesy: Future Gallery and the artist