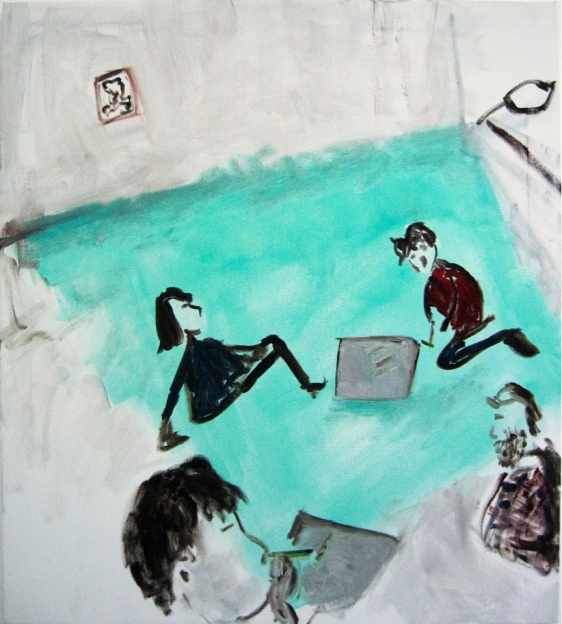 Animals, absurd sex scenes, banalities and popular media – Trevor Shimizu´s work ranges between large-scale scribbling and conceptual humour on canvas. In this way, the artist conceals and abstracts something that became a trivial routine: self-exposure.

Working with a variety of media and disciplines such as video, sculpture, and performance, Trevor Shimizu´s practice is particularly known for his paintings. With good reason: His brush strokes appear as the striking principle throughout his work. Fast, chaotic, rather light and slightly aggressive, they are scarcely covering the entire screen. How can Shimizu still provide the likely perplexed public with sweet, soft playfulness? 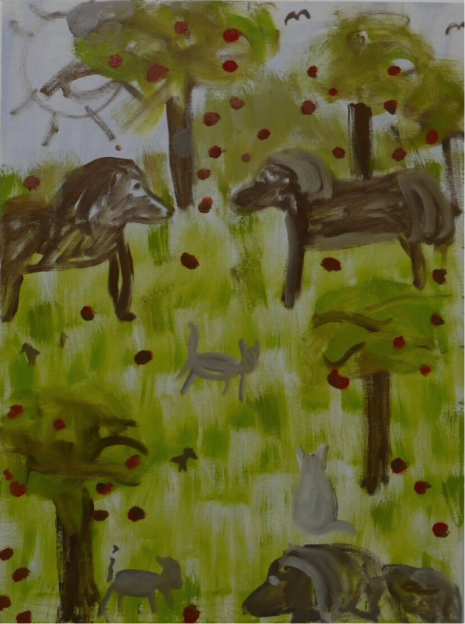 Evelyn Yard presents a selection of work at this year’s abc art berlin contemporary, including his recent paintings “Breastfeeding“, “Horses, Apples, Cats“, “Cow & Dog“, and “Find Yourself“ from 2010. The images will be supplemented by a video piece.

Shimizu’s paintings are said to have both the appearance of direct naivety and implicit dark humour. Yet, they primarily display scenes, which are highly oriented on a straightforwardness of the very familiar, the vernacular, the intimate. Trevor Shimizu avoids displaying stories or insights; and maybe this isn’t needed. He visualizes fragmented actions, which can be grasped as stories, spaces or personalities just by themselves, without revealing a personal dimension behind it. We can call this naive, even childish, but it is rather an empathic space, which is opening up here – showcasing the imaginary dimension of mere reality. 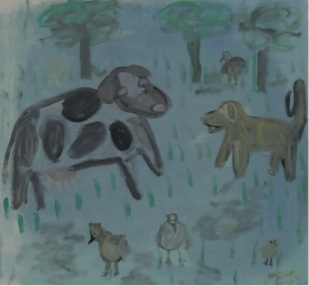 It can come as no surprise due to the fact that Shimizu’s paintings are embedded in a multitude of media. The performative dimension of the banal, the effect of feeling connected to a concept of daily life is already echoing different popular formats and forms, all reflecting on the fast, subjective and certainly inaccurate dimension of the images we all know. To use paint as some sort of trace, giving body and depth to the flat canvas serves as dry method to mystify what we thought we might know: our routines, our sexual preferences, our friends, partners; ourselves. Just as much pastel pink is used in one picture, just as much grey one can find in the other. As prosy and hazy as one might consider one´s life, it always changes colour and light, often more fast and radical as we expect it to. Maybe it is not the paintings that are pointing on something subtly dark, but us who elude something too clear.

If painting thus means to create two-dimensional surfaces, which for their part open up space for something we call “the image”, Trevor Shimizu´s work shows images that paint surfaces of scenic spaces. If painting is dead, Shimizu revives it by a lively funeral feast; if painting is contemporary king, he revokes its glamorous myth. In any case, his brush strokes play with the promise of disclosure – but what we see is stripped bare on its own. Tragically smiling. 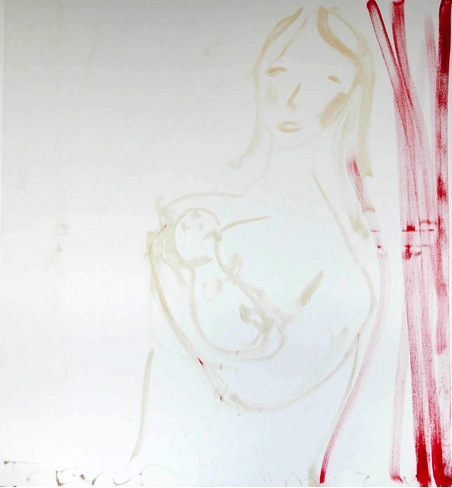