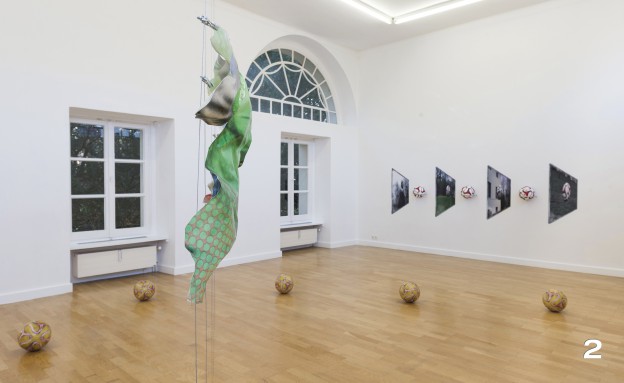 The young german artist Florian Auer will be presented from Kraupa-Tuskany Zeidler this year. Read here the interview with Florian Auer by our contributor KubaParis about his work and his presentation at abc 2015.


Your last solo show “You’re live” at Kunstverein Braunschweig in 2014, dealt with football and broadcasting. How did you come up with this topic?

I’ve always been a football fan and I think that football and sports in general are good occasions to talk about perception of reality and about hyper-reality. The starting point at Kunstverein Braunschweig was the question as to what kind of reality a live broadcast produces. Over the last hundred years the game stayed the same; however, its media presentation – especially with regards to camera coverage and speed – has fundamentally changed. Of course, sport events are cost consuming to such an extent that big efforts – in terms of economic as well as power resources – are put into the development of new camera technology, which not only delivers new perspectives but also generates a three-dimensional perception of space. This, in turn, influences the way we perceive the game – this brings back the question of perception of reality. One should also think about the effects live broadcasting has on our daily life. I would suggest that through broadcasting the game of perception has considerably changed.

Then, I would suggest that art also deals with transmissions. Land Art, for example: the artists went outside and had to deal with the question of how to transform the work outside into an exhibition inside a gallery. When I work on a sculpture I always think of the installation shot at the end. The aim is, however, not to make them look good but to consider how a sculpture would do on an installation shot. Here I see a certain analogy to how the real game appears on a live broadcast. Adidas had this in mind, too, as they designed the soccer ball with its famous black-and-white pattern for the World Cup in Mexico in 1970. This was the first broadcasting that went global. At the time, TVs were of very bad quality; and for the most part, they were black and white. The design was conceived to match these conditions and make the movement of the ball visible on the screen.


For the forthcoming abc edition you said that you are planning to extend your work on that basis. You showed me an image of the model: I would describe it as a hanging longish board with a round hole in the middle and soccer balls on both sides.

Yes, I now work on modelling another floating installation that will be suspended from the ceiling. For me it is like an over-sized perpetual mobile reacting to the air circulation and other kinetic impulses in the exhibition space. 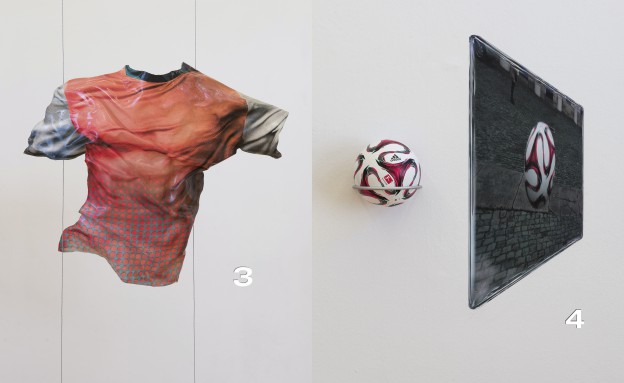 Your work is, nevertheless, not really about football. Soon you will publish “Rough Surface” with onestar press. What we see in this book are close-ups of a ball that spins on the pages; few text fragments pop up within the image flow. At the beginning one can read the word “quasi subject”. So, it isn’t a ball at all, is it?

Definitely not, I use sports more as a tool to address certain topics I am interested in. In that book, indeed, I can explain how I use the ball as an object to talk about something else. The ball is not a ball at all; it is a rendered object since it is completely 3D animated. It consists of two elements – rounded form and surface. A perfectly round ball has unpredictable amplitude of movement; this is what you could see on the free kicks by Cristiano Ronaldo for example or what tests conducted at NASA laboratory also made obvious. That’s why the dots were invented to cover the surface in order to stabilise the ball in the air. A moving ball thus creates an instable movement. For me it is a nice metaphor of an instable image, as well. Their instability is also due to the fact that in the hyper-reality created through broadcasting you never exactly know how close you see reality. This instability I wanted to set up in the book. However, the book was not meant to illustrate a specific notion; I wanted to turn the book itself into a sculpture. The idea of a “quasi-subject” then refers to the fact that you don’t know whether you are dealing with a ball or with the subject of the book.

That’s true, the form of the ball in the book is obviously not regular. It swells to the left and then to the right. This is due to the fact that I divided the ball as soon as it touched the spine. The reason was that I am interested in a form that would create space on a double page – and a double page always has a left and right side as well as perspective. Another problem of the double page that also bothers me: When one looks at a half opened book, a part of the visible information disappears into the spine. I decided to deal with these problems, so figures became more and more abstract. Then, I made the spinning ball create a floating movement within the book.
Since I want to turn the book into a sculpture, I am interested in how to turn the book into a subject. But I want to go further and think about the status of image. I want to test this kind of classy idea of how the object/ball defines the space or whether it is rather the space and the spectrum of available movements within that defines the object. 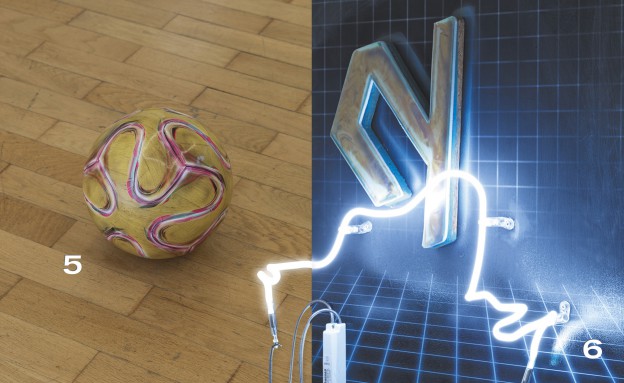 The text seems to follow the logic of the images as it is also kind of floating. This makes it also different from a typical catalogue essay.

I invited Ana Ofak who is an art writer as well as media theorist to work with me on this publication and also to write the text. The book is the result of this collaboration. The main aim of the text is to test new words and new terms – similarly like fast technological development within the broadcasting industry demands new language. The text is also about correlations that I deem relevant for my work. During the research, for example, we discovered the military being interested in technology used by big broadcasting corporations and especially the recently widespread utilisation of drones. The military is also interested in real-time broadcasting of operations and the surrounding situation and in gaining access to multiple perspectives. Sport broadcasting has huge expertise as it has been dealing with these issues over the past thirty years.

When I look at the model for your upcoming installation at abc, a mirroring effect occurs when one sees both balls on both sides of the hole. It seems to me that once more you’ve used the formal approach based on repletion that was central for the installation at Braunschweig. This is a rather cool-down technique that opposes to the emotional side of sports.

The mirroring is an optical trick. But to me it has rather to do with mimicry and formal repetition than with interaction. It is not about making you walk around and stuff like that. The installation has a non-relational quality; as the body of the observer never becomes a part of the work through a real mirroring. I don’t want to create an emotional situation, either. I use a rather minimalistic approach that leaves you alone even if there are all these illusions and effects. It leaves an empty situation.


At this point, it would be interesting to talk about the body as in your work the body intentionally disappears – the hanging business suit at S.M.A.K in Gent in 2013 as well as the tricots in “You’re live” in Braunschweig are only shells; one never sees the leg that kicks the ball in the publication we’ve talked about above. There is always this duality – of having a body and at the same time having the desire to leave the body and to have a look from the outside.

In the last couple of years Spidercam – a system that allows cameras to move both vertically and horizontally over the playing field – became an important part of broadcasting of sport events. It allows you to become part of the “game” as it shows multiple moving perspectives of one and the same action, where they tried to show speed of movement by slowing it down and show it from different perspectives. In my work I am very interested to achieve this “bullet time” moment – I try to allow both an outside position and a position in-between simultaneously, just as broadcasting does. 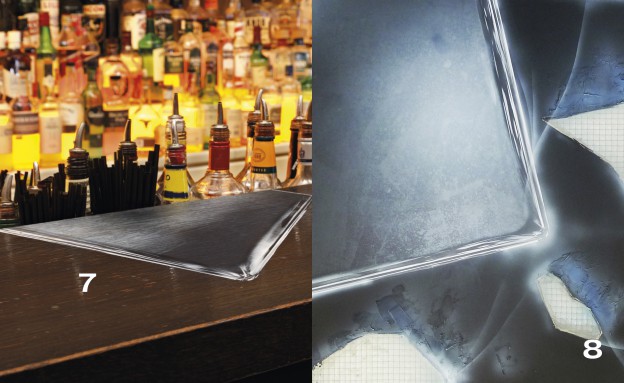 And there is again this fragmented view – similar to the way you present the ball in the book – since you can never see the whole object.

I would say that the sculptures I create somehow walk away from you and you never see everything. But it creates something in your head and what you’ve seen is your decision. When you have to describe it, then it becomes interesting. It is about what you see when you are away from the sculpture, what is the image that becomes alive in your head.


At the same time technology allows you to see the object from above, as a whole. You already mentioned Land Art; these “earth works” were not only to be seen on aerial photographs, but their perception was also dependent on TV-broadcasting. Would you say that broadcasting allows the non-fragmented view?

Yes, exactly, I also think on Gerry Schum’s TV Gallery in the late 1960s who introduced the term “Land Art”. The art works were made to be displayed on TV. This is the way I consider my work as well: the installation shot makes the work complete.

Viktoria Draganova is curator and writer based in Frankfurt am Main and Sofia as well as director of SWIMMING POOL Sofia.
The author would like to thank Gergana Todorova, curator of Auer’s exhibition at KV Braunschweig, for helpful remarks.