Returning for the second day at abc, there is something like a coming-into-focus and a sense of things becoming a little clearer. Given time to adjust to the particular feel of the venue, certain works begin to emerge requiring a softer, more deliberate type of looking. 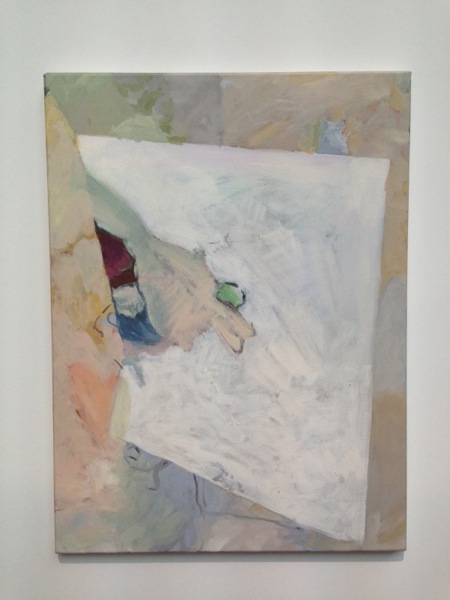 Andrew Kerr’s paintings, shown by BQ, Berlin and The Modern Institute, Glasgow, displayed on both the white walls and the wooden supports of the temporary structure, feel enjoyably quick and provisional whilst dramatising the specific form of the painterly study, with their small, muddy compositions stapled and photocopied, almost as if the decisions concerning what to do next are still being considered. 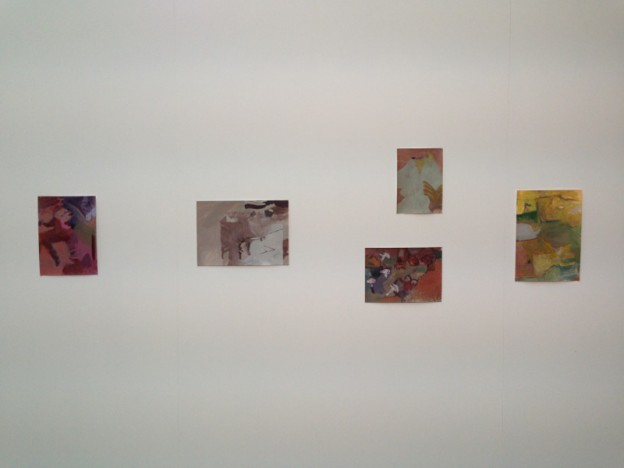 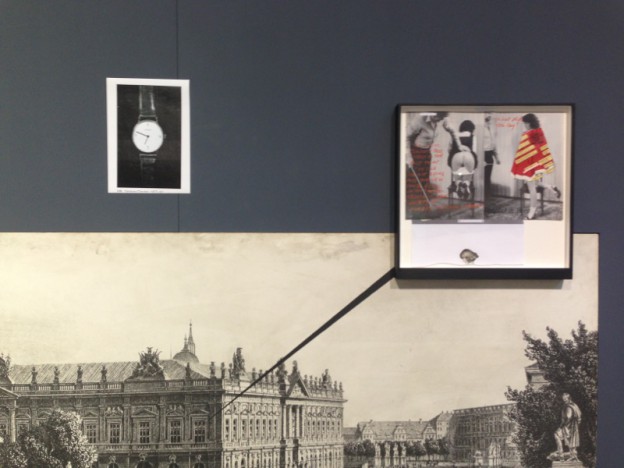 Mathew Hale’s work, a combination of small-scale collage and a broader, formal installation, is also pitched somewhere between the provisional and the resolved: a series of intricate and precisely executed images at the service of oversized and vulgar jokes is tempered by a convincing level of mischief mixed with concerted attention. The jokes are pretty crass but the delivery is neat, bordering on delicate. 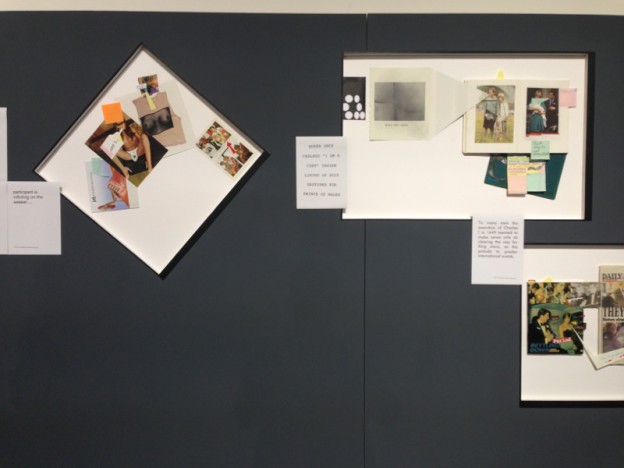 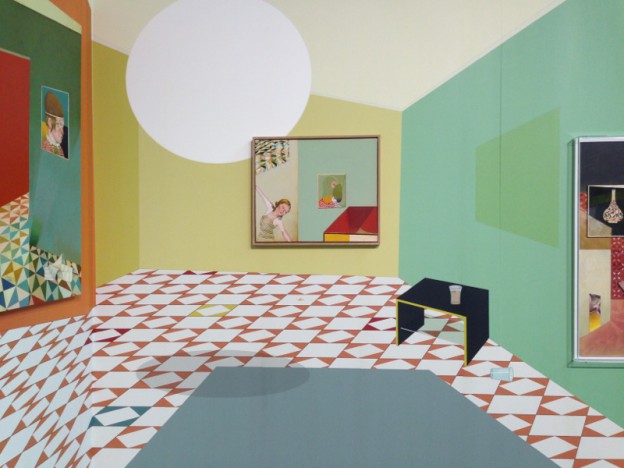 In the same hall, in the far corner, Jens Fänge’s installation is a heightened depiction of perceived space. Though pronounced in its artificial and theatrical simplicity, details and nuances emerge and surprise: paintings overlap depicted planes and the actual surface of the wall, perspectives shift from room to room, folded paper distorts the angled pattern of the floor, and three-dimensional forms jut into real space only to be flattened by their surroundings. The overall effect is again that of quietness, of small hidden jokes and relief within a bigger picture. 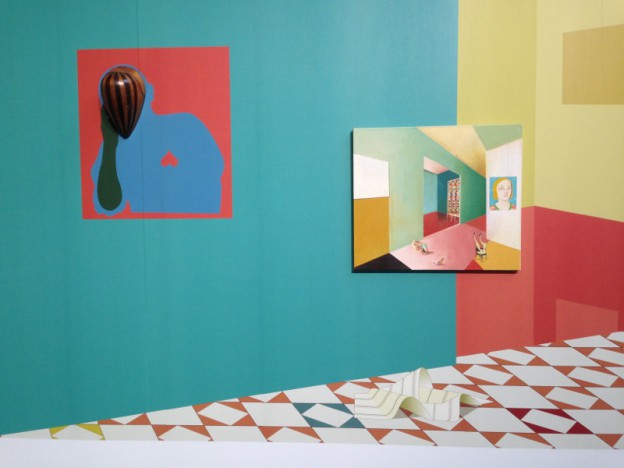 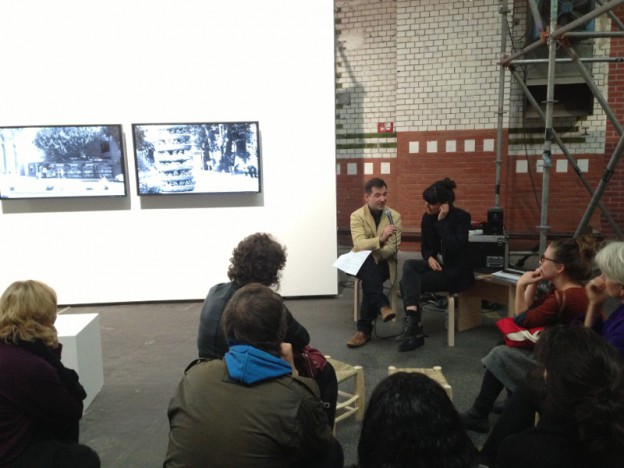 A conversation between Anahita Razmi and Christian Malycha at Carbon 12, Dubai, centred on the potential effects of pitching two modes and perspectives against each other. In her work A Tale of Tehrangeles, Razmi employs the formally simple technique of pairing images in a strangely compelling video work where footage of Los Angeles and Tehran are edited together and interwoven over two screens. The work provides an oblique meditation on similarity and difference and the translatability of surface appearances: streets and coffee-shops, public spaces and shopping malls are all shown to be liable to being mistaken at the same time that their details and specifics display a lightness of touch and an illusion of off handedness in the editing that result in a work that says much without ever explicitly pointing a finger in any political direction. 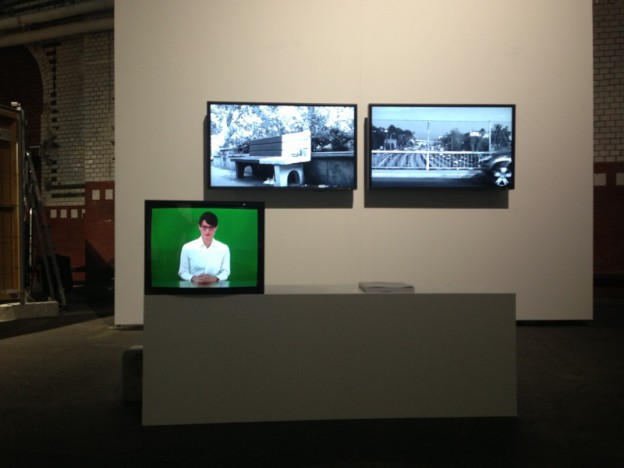 A third video element in Razmi’s work consists of a woman appearing as a newsreader against a green-screen backdrop reading the opening lines from Dicken’s novel A Tale of Two Cities (“It was the best of times, it was the worst of times, … we were all going direct to Heaven, we were all going direct the other way”), the basis of the work’s title, further rhyming with the two screens’ diametric relationship and the sometimes illegible gap between the two images and the two cities.
The deployment of the fictional into the documentary (or at the very least, the believable) can sometimes serve as a precise technique to locate and question connections and relationships. Without meaning to, today I found myself in front of works that seemed to hold more than one possible outcome at once; works that hold a second or third quality beneath what is at first apparent.