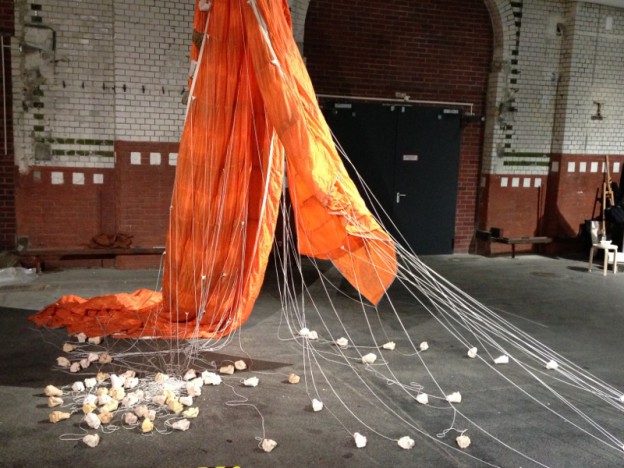 Promised to become the art event of the fall, Berlin Art Week has kicked off with a typically hip streetparty at Auguststrasse this Tuesday. Following up on the promise, the week will carry on with a massive art program spanning from four major painting exhibitions, gallery openings, artist talks, performances, art fairs, parties, to whatever will pop up out of the artists’ creative minds. The stakes thus are high, as Berlin’s art scene is not only catering to a manageable art circuit but to a whole city of art enthusiasts. And for me – as an expat to the city – this wide-ranging interest in all kinds of culture is something that I really appreciate about Berlin.

Hence, the expectations for this sixth abc art berlin contemporary, taking place at Station Berlin from Thursday to Sunday, are also tremendously high. With its innovative, artistic-centered format, abc is hosting the concept of solo representations this year. 133 galleries from 22 different countries present one chosen artist, handing them over the freedom to transform the dedicated space. And the reasons for choosing one representative out of the galleries’ portfolios are as diverse as the ways of staging them in the fair’s huge halls. The landmarked former train station gives enough space for innovative exhibition designs that goes far beyond the traditional white cubed booths that we are used to experience at fairs.
In many ways the abc represents itself as a fairly new concept of art fairs as the focus and intention of the galleries do not lie solely on selling but on showing, telling, seeing, hearing, gossiping, marveling, exchanging, drinking, reading, etc. Interesting to note that also the overall concept of the fair focuses on sustainability, which can be found in abc’s exhibition design that incorporates the already existing raw structure of the hall instead of producing expensive one way architectural solutions. The fair’s intention of creating sustainability not only lies in its architecture, but in my eyes also in the tackling of the visitor’s way of perceiving art. Many participating galleries represent artists through time and site specific works that can disrupt a traditional view on art and the typical fair experience. What I’m talking about here is, for instance, the site-specific sound installation by Pae White (neugerriemschneider) that announces abc’s events. Everything seems to be covered – ranging from the traditional painting, time-based installations, sound sculptures, performances, video, to politically driven installments and socio-activist works.

But before you wonder whether I’m abc’s marketing manager let me underline my enthusiasm with some practical examples of my day one at abc.
The Swiss gallery ROTWAND decided to showcase the collaboration between Anetta Mona Chisa and Lucia Tkacova who created their installation specifically for the given premise that allowed experimentation. An orange parachute is hanging loosely off the ceiling – a failed attempt of landing it. It gets its interesting twist from the female fists that are attached to it by strings and are grounding the parachute but not getting freed from it at the same time. What made me stop in front of it was its subtle depiction of utopian protest. 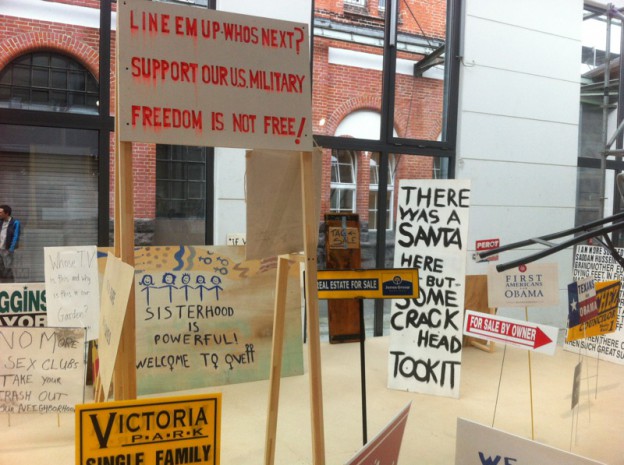 Another work that I was impressed by – and one might note my affection to works with a critical touch – was Sharon Hayes’ installation of public signposts at Tanya Leighton’s space. Those signs that are usually seen in peoples’ front yards are placed on a pedestal in seemingly random order; on a closer look though, they can create a funny yet worrisome narrative. (This is only once piece of Hayes’ larger exhibition at Tanya Leighton by the way!)
Showcasing another radical position is Olaf Metzel at Wentrup who belongs to Berlin’s older generation of artists. The gallery decided to show a destroyed soccer stadium stage. For me it fits the raw steel atmosphere of the halls and shows another radical position, as Metzel is famous for his politically driven interventions in Germany. He challenges the notion of how fans can generate a feeling of belonging and togetherness and how these mass dynamics might end up in violence.
So let me conclude my first encounter with abc. My first impressions (and some of those I talked to) are that the fair can be perceived as a massive group exhibition cobbled together of 122 international artists of all genres and media. The positioning is random, but strolling through it can create interesting connections nevertheless. The high halls and the occasional white walls allow the viewer’s gaze to wander through the vast space, through the various stands and tackle the usual one-on-one encounter with gallery booths. 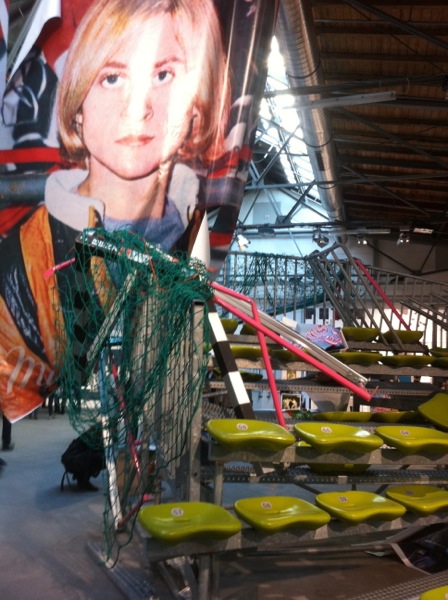