As it happens so often, there’s is an epilogue to yesterday, a long last night out. Frieze magazine threw one hell of a bash. Or did we? What do these feet level? Trembling on the dance floor. Anyways. There’s the idea that something like a commercial art fair – which is a marketplace as well as a social mixer – maybe is like our modern day forum. This is probably rubbish and I wouldn’t be able to claim this. 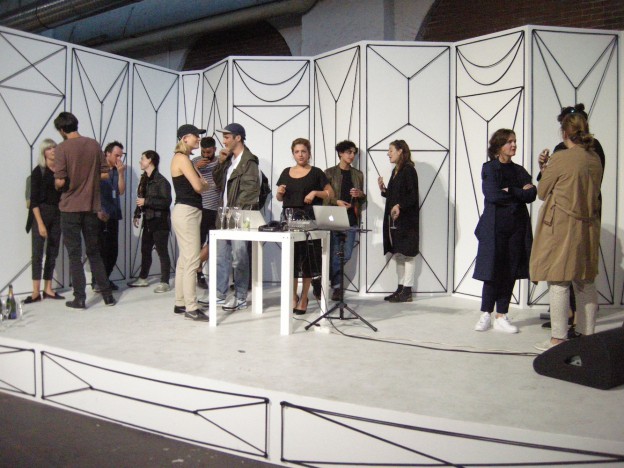 Considering I didn’t even make it to the fair today. Because frieze magazine really did throw one hell of a bash. Especially thanks to performances by Mo Probs and Dan Bodan. From what I’ve heard, abc is still going strong tho. To do my job somewhat properly and still report from this day of art fair activities, I decided to catch artist Juliette Blightman before she’s boarding her plane to New York. Over homemade meat sauce and gluten free pasta, we’re discussing her collaborative work (Blightman/Salomonwitz: “Spills”, 2014) which occurred today on Julian Goethe’s stage at the back end of abc, a lonely remnant of Scott Cameron Weavers much-heard-of week of spectacles at Kunsthaus Bregenz earlier this summer. “Spills” happened as the somewhat gloomy after effects of a joint production which was staged at New Theatre – run by Henkel/Pitegoff – last week.

Tenzing Barshee: Glitter and disco seem to be big motives of these summer days ending.

Juliette Blightman: In the words of Derek Jarman: September begins and the garden starts to die.

Tell us about “Spills.”

It’s about letting it all out.

Let’s start with the news first. What are you going to New York for?

While I was telling my story, I noticed that a silence fell on a table.

I have no idea what you are talking about.

When I first came to Berlin I photographed every single book in the archives of Pat Hearn and Colin de Land at MD72. Those archives are now travelling from Berlin to New York’s artist space where they are part of the exhibition The Library Vaccine, I’m going with it.

Cool and today you DJ’d at abc.

Didn’t your 5-year old daughter also contribute to this?

Yes, we used a photograph of hers to advertise “Spills.” Calla showed her how to shoot pictures with their Hasselblad. She then took a lot of production and set photography. The picture we used is of Urbanstrasse in Kreuzberg where New Theatre is at. It’s the only one where no one appears in it.

What’s the first song you played at abc.

It’s all for you by Scout Niblett.

You only played female musicians.

Yeah, except in the end we youtubed Al Green’s Call Me tho. The playlist was a bit for the hung over people. It followed the potential events of such a night out.

Each song represents something.

Like you meet someone. Then you fall in love and if they don’t fall as well, someone else comes along. Then you wake up and fuck the pain away.

And Peaches played the first abc I went to.

Then everything comes back full circle and maybe you’re still waiting for someone to call.

It’s not only talking about what two or a few people experience. If you think about it, cycles like this can be applied to many things.

And an editor at frieze, yes. She told me his computer and everything was stolen at the party he co-organized last night.

Yes, and in “Spills” there is a German monologue spoken by Flora. It is from a dream sequence that Yael wrote, when she was in Rio in the beginning of this endless summer. There’s this line: “Mein Computer ist weg. My computer is gone.” She thinks it’s lost and her whole life has vanished along with it. In the end, she finds it all.

Let’s hope Pablo will be as lucky.