It’s a bright and green Berlin sun out, and again, it starts with a joke. Two men are meeting in a public bathroom. You don’t say. Both men are grinning. “Are you showing,” one asks. “No,” the other replies. “Juuust loooooking”. Double grin. It’s 11am and they meet in the catacombs of abc art berlin contemporary, everyone gets it by now. One’s half naked and standing in front of the mirror in the all-in-black painted WC. Half of his body is covered in black paint as well. “What are you doing?” “I’m doing an act. (pause) For John Bock.” “When?” “Every twenty minutes.” Chuckle. “It starts at 12,” says a woman, coqAsian, wearing morning heels. She’s smearing more black on his back. “Where?” They burst it out at the same time: “C5.” Second chuckle. abc has subcategories. It’s not really funny, this joke. An exchange of implausible shyness. People, text messages, and emails are coming in, on airplanes and in black cars. abc, it sure works like spell. 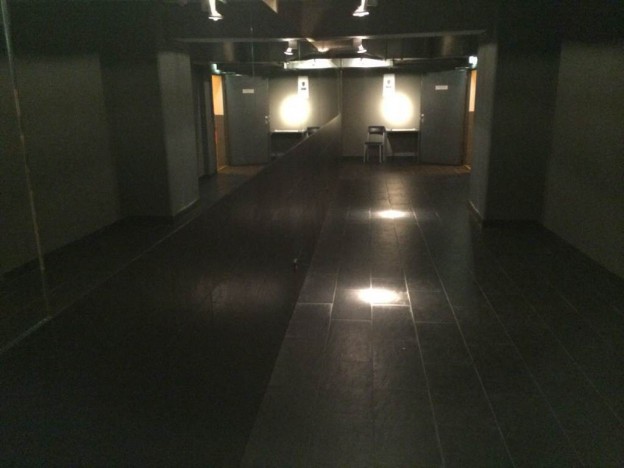 He’s fantasizing about touching the black paint on the actor’s body and then the all-in-black painted walls. His hands are still wet. He’d probably make a mess. But isn’t drawing one of the oldest forms of human expression? “Have fun,” they say. The actor’s face turns back into work mode and he turns to the woman in the morning heels: “Let’s do the eyes,” he says. Incoming email from MLK, New York: Snails!!!!!!!!!!! Msg: Pier la cheese snail moles-station. Reply: Elizabeth Bishop. Giant Snail. Something about the rain having stopped. It’s still summer, thank you for the sun. While walking back upstairs, he daydreams about full-on brutal capitalism, like Russian dudes paying Bratwurst with 500 Euro bills. Instead everyone is kinda in a good mood. It’s early and supposedly there’s a press conference somewhere. Welcome to abc. Welcome to Berlin. Maybe not in that order. This joke lacks a punch line.

Upstairs from the all-in-black painted bathrooms, there is actually a bar. It’s not really a booth. It’s more like a cupboard. Except there’s 12-year old Scotch. Probably designed and definitely conceived by Alex Hubbard.

One sip. One picture. One pose.

Then he pays with a smile whilst the gallerists argue about the number of people that are supposed to be in the cupboard at once. Narnia is a good drink. Good luck and many wishes are offered. abc is a place where large ideas are handed over to you in small portions. Here’s another one: he’s feeling quite disoriented wandering over this art fair in Berlin. Isn’t there an irony there that points to a difficulty in wandering around anywhere, which is that it’s hard to know when your act is truly aimless or unplanned, and when you are merely striking a insouciant pose for some omniscient or future gaze.

Fairy tales of men walking these halls in wifebeater v-necks and drowning in jewelry, turn out to be true fables. How to orient within this alphabet? Mostly coqAsian. He’s armed with sugarcoated promises. It’s going good. Who cares? Stereotypes are easily dealt and exchanged. “Bio Zisch Limonade, zwei Mal, bitte.” Why are we acting as couples? Pride and promiscuity. Lust and liposuction. In the end, it’s all bodies and pertinence. And how is it, everyone has to negotiate the questions of the right human idea with themselves in the end, always in regard to such an abstract idea like humanity?

He thinks about the bright and green sun in the sky. As his gaze leaves an abstract spray painting by Davis Rhodes and finds a book by Trisha Baga lying on a bench. It looks like The Great Gatsby, if Trisha Baga hadn’t exchanged Gatsby with Pam. The book is discussing distance: Starting with the actual size of the original book cover and then moving outwards, until you’re in Trisha Baga’s studio. Bits and bites everywhere. Then back to the actual size of the original book pages. Where were you on November 14th? And why are there so many collective nouns? Gatsby was looking over the lake. Striking distance.