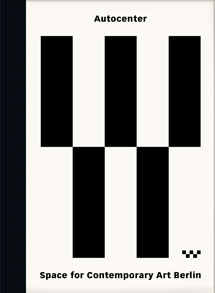 Founded in 2001 by Maik Schierloh and Joep van Liefland in a former car varnishing workshop in Berlin- Friedrichshain, Autocenter has established itself firmly as one of the most important exhibition locations in town. Re-located in Mitte since 2013, Autocenter hosts shows of German as well as international artists in high frequency. This publication captures the fleeting character of Autcenter`s 160 exhibitions with more than 750 artists, that in the beginning used to be on show for two days only. Severe as an archive, this publication accumulates documentation of the production of contemporary art in Berlin of the past thirteen years. With a conversation between Maik Schierloh, Joep van Liefland and Kolja Reichert and texts by Jennifer Allen and Thibaut de Ruyter.