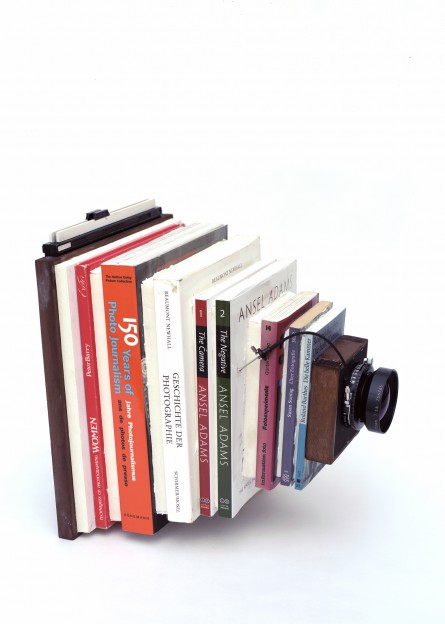 We love the way Taiyo Onorato and Nico Krebs (both *1979) comment on the phenomenon that almost every text about photography cites the same few authors, mostly Roland Barthes or Susan Sonntag: The Swiss photographers have compiled twelve classics from the realm of photography theory, caved them, added a lens in front and a plate in back and thus turned them into a self-made camera. At the forefront of the manipulated book stack: Barthes Camera Lucida (1980), directly followed by Sontag’s On Photography (1977). If these authors’ highly cited words have become hollow by repetition, the least they can do now is use their hollowness productively by serving as the body of a DIY picture-making device.

The comical, ironic approach to photography is typical for Onorato and Krebs. They studied photography at the Zurich University of the Arts and have been working together since 2003. Their book camera is part of a series and publication entitled AS LONG AS IT PHOTOGRAPHS/IT MUST BE A CAMERA (2011), showing a range of other unthinkable home-made camera fabrications– a tortoiseshell is just one of the numerous extravagant materials in use here. Their series The Great Unreal (2010) is equally amusing. A road trip through the USA served as a background for putting the most diverse modes of analogue manipulation (and some American clichés) to the test: a fake cardboard street leading towards the horizon mocks the notion of the endless Midwestern routes while in another picture a slope in front of the Grand Canyon is populated by a flock of French fries.

At this year’s abc, their Zurich based gallery RaebervonStenglin will be showing some of Onorato’s and Krebs’ abnormal self made cameras and a series of “spins”: a kind of kinetic reflection upon the notion of the still life, resembling spinning photograms. We are very excited to see how this young artist duo’s illusionism and humour will surprise us in the future – and how many texts will be written about them including quotations by Barthes and Sontag.