Today we’re happy to present the first post of our second contributor Niche Berlin, in the next weeks they will give us their unique insight into what they are looking forward to at this year’s abc. First up Daniel Keller and DIS. 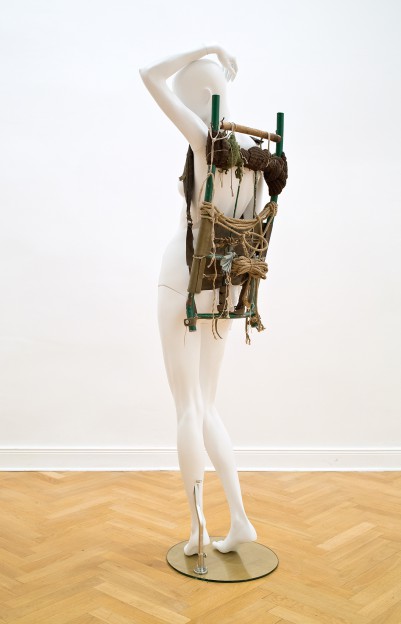 This year’s abc will be “performative” and young. Speaking of young: we’re especially excited about the contributions by Kraupa-Tuskany Zeidler gallery presenting Daniel Keller and New Gallery, showing the artist collective DIS. Both galleries are dedicated to building up young artists whose works engage with a contemporary culture in which the internet is a given and who naturally exploit its possibilities –some of them are labelled post-internet artists.

His contributions to abc deal with pessimistic prognoses for a culture in which technology replaces manpower, such as Freedom Club Figure (2013): a mannequin wearing the hand-made backpack of technophobic mail bomber Theodore Kaczynski. Keller acquired his accoutrements in an FBI auction. For the installation Soft Staycation (Gaze Track Edit) (2013), Keller filmed a group of unemployed and free-lance expats with a gaze-tracking camera while they’re watching a compilation of national tourism commercials, and presents the video on a flexible LED-curtain.

While Keller stands for multi-layered comments in eccentric materiality, New York based collective DIS is known for their high gloss cynicism. DIS is formed by Lauren Boyle, Solomon Chase, Marco Roso and David Toro. They run DIS Magazine, stock photography agency DISimages and participate in exhibitions in institutions like PS1 and New Museum or intervene in exhibitions contexts, such as Art Basel/Miami Beach. In their rather humorous way, DIS embrace popular culture and institutional critique and question consumerism but also the art system by exaggerating their respective aesthetic strategies and argumentation

The video Emerging Artist (2013) is one of their many commercial-like clips. It shows three pregnant bellies, which purportedly might carry the next genius the art world is waiting for. Photograph Missy with Starbucks (2013) is a disturbing example of the absurd digital stock images provided by DIS images that combine the aseptic aesthetics with improbable motives. And the work Media Companion #ta15 (2013) consists in branded polyester suits that should be worn by guides who accompany visitors on the abc grounds – at least that’s what were expecting.
But then, visionaries like Daniel Keller or DIS are all about the unexpected.