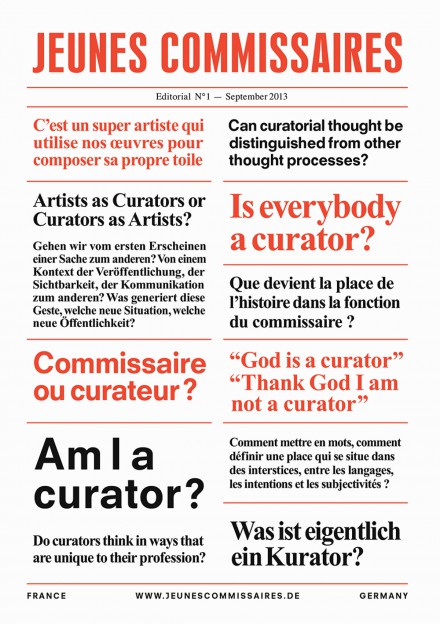 Concurrent with the opening of the Berlin Art Week and abc art berlin contemporary, the Institut français / Bureau des Arts plastiques, under the direction of Cathy Larqué, is launching JEUNES COMMISSAIRES, a new program directed towards emerging young curators from Germany and France.

Beginning today, five French curators will attend workshops in Berlin, organized by the Bureau des Arts plastiques. Alongside get-togethers and conferences with different curators and directors from Berlin’s art institutions, including, among others Juan A. Gaitán (curator of the 8th Berlin Biennale) or Joachim Jäger (Deputy Director of the National Gallery and Head of the National Museums‘ New National Gallery) as well as Marius Babias and Kathrin Becker (Directors of the n.b.k. Neuer Berliner Kunstverein), the participants will also meet independent, progressive curators such as Anna Catharina Gebbers (Bibliothekswohnung) and will conduct studio visits.

The curators invited to participate at the first iteration of JEUNES COMMISSAIRES are Arlène Berceliot Courtin (1982, Paris), Fabienne Bideaud (1982, Paris), Karima Boudou (1987, Rabat/Paris), Jeanne Dreyfus-Daboussy (1986, Paris) and Anaëlle Pirat-Taluy (1980, Grenoble). The website www.jeunescommissaires.de will accompany the workshop, and, starting today, will feature photo documentations and interviews, which will allow insight into the participants‘ curatorial activities and their own commentary on the program.

The launch of JEUNES COMMISSAIRES marks the beginning of a new direction in the promotion of young talents in the art scenes in Germany and France. Devised as a discursive platform, the program supports participants in building an international network as well as in developing their creative ideas. In addition to the exchange – both personal and contextual – among participants, the program focuses on building connections to experts and gathering professional experience within international structures.