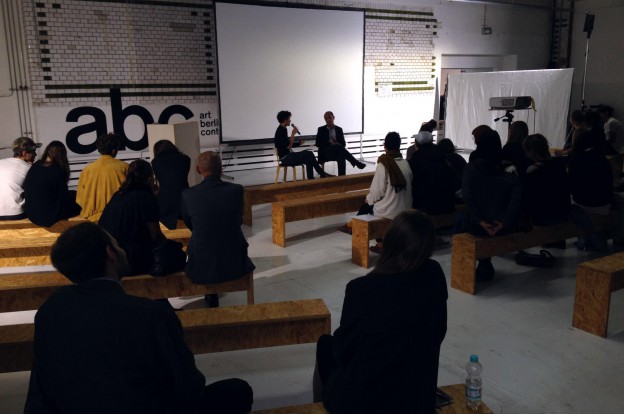 The emergence of new media forms has always been connected to different hopes and fears, and no where is this more true than on the internet. Digitalisation has already had a crucial impact on cultural production in a number of ways, and while it has rendered it easier to access and to participate in the global information flow, it has, at the same time thrown up some important questions in terms of intellectual propriety. The impact of the internet on the music and film industries has been widely discussed over the last few years, the same however cannot be said for the art sector, where such discourse has been somewhat sidelined. In light of this, it was interesting that the New York-based Artists Space should choose to invite e-flux founder Anton Vidokle, among others, to come to abc and talk about this very issue – the relationship between artistic production and new developments in the online sphere. Vidokle presented a topic that has not yet received a lot of media attention in Germany; the sale of new internet domains and the question of how that may ultimately effect the art sector.

Starting next year, ICAN, the organisation responsible for the naming protocol of every website on the internet, will begin to introduce new domains – that is the ending of internet urls such as .com, .org, and so on. According to Vidokle, this change has the potential to fundamentally alter the way in which information is arranged on the web, in the sense that most information pertaining to food will be available in a .food domain, while most information on cars will likely be found in under .car, and so on. – producing “a completely new form of online real estate“.

E-flux, an international network that connects art professionals through their website and newsletters, has applied for the .art domain. Essentially, this means that should they get it, e-flux will have the power to distribute websites with said domain, to those who wish to be connected (or perceived to be connected) to “art” in some way – what ever that means. And this is where my suspicions begin to creep in. E-flux plans to set up a committee of experts comprised of artists, art historians and curators who will be able decide who merits being a part of .art, and indeed who does not. In doing so the committee will assume what is best described as the role of gatekeeper. Vidokle is certainly right in saying that it is better to have an assembly of peers handling this new “art space“ on the net than to leave it to big profit-orientated companies. In addition, e-flux plans to return some of the money they earn with the project to the art world in the form of funds and grants, which could become an innovative way of supporting underfunded art institutions.

But while this all sounds very promising; how exactly do they want to decide whose internet presence is “art-worthy”? More importantly is it even possible to make a selection considering the huge amounts and huge diversity of information buzzing on the internet? One of the most interesting comments to come out of the discussion was the concern voiced by one audience member that such initiatives present a problematic progression for the internet. While this development seems like a logical step both for the internet and in terms of the commercialisation of the art world, the internet is – at least in theory – perhaps the last wholly democratised space for art which still exists. Rather than placing limitations on what is art or should be, the internet inherently cuts across and dissolves any such delineations, and therein also lies its value for cultural production which could shift if this project goes ahead. Furthermore, if we take into account the selection process and the costs involved it seems that this project could come to simply reproduce existing elitist notions in the art world. But, just as Vidokle retorted to this comment – this might not be so important after all. It will only ever be another choice, another option. Maybe everyone will just stick to .com in the end. And maybe art will be just art and will not be affected by technical change all that much.