Today „do you read me?!“ presents Berlin.Status 1 & 2. On our behalf its worth pointing out some of the artists you will find in both these catalogues that will also be at abc in only two weeks time: Julius von Bismarck (Alexander Levy), Michael Sailstorfer (Johann König), Ulrich Vogl (Galleri Opdahl), Katinka Pilscheur (Galerie koal), Nasan Tur (Blain I Southern) 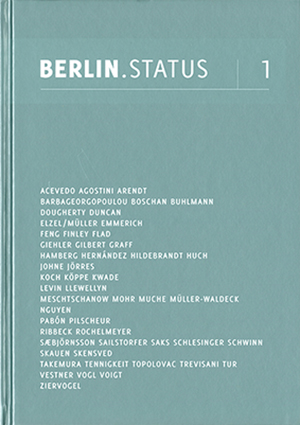 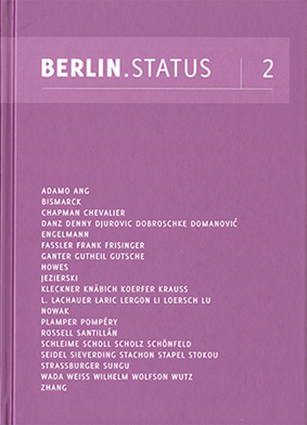 Berlin.Status 1 & 2 Text in German and English  34,90 €
Berlin.Status 2 is the catalogue of the exhibition that took place early this summer in Künstlerhaus Bethanien. Following up last years show Berlin.Status 1 that presented artists born between 1973-1980, and curated once more by Sven Drühl and Christph Tannert, Berlin.Status 2 features about 50 German and international artists of the youngest generation, born from 1978-1984 who live and work in Berlin. The curators observe Berlin as a city that still attracts artists from around the globe as a place transforming itself constantly, but lately in a direction away from diversity and subculture. Cultural and spacial niches particularly useful and attractive for artists are increasingly being wiped out by gentrification, raising property prices and finance-oriented tendencies in local politics. As all of this is no news, the effect of those changes, the way of reflecting, adapting and working of young artists and possibly the re-awakening of an old taste for opposition and intervention can be observed – and is the starting point for Berlin.Status 1 and 2. This second volume offers a glimpse into the artistic tomorrow and offers a huge range of positions and media. Each artist is presented on a double page with images and German text, the English translation is placed in the back. The catalogue is self-published by Künstlerhaus Bethanien in a run of 800.