Rumour has it that Michael Sailstorfer’s studio building in Weissensee, on the tranquil outskirts of Berlin’s Prenzlauer Berg district, was once the production studio of early German film pioneer Joe May. Witness to the cinematic origins of Fritz Lang and Marlene Dietrich in the 1920s, the high vaulted ceilings of these stable-like workspaces are now the preserve of a number of Berlin-based artists and designers. Many of Sailstorfer’s artworks are large-scale creative interventions into natural processes, using such a range of materials and resources that few could imagine a studio space that would enclose them. And, in truth, a big part of his work is realized in the great outdoors, mostly in picturesque fields or farmlands scattered throughout rural Germany. 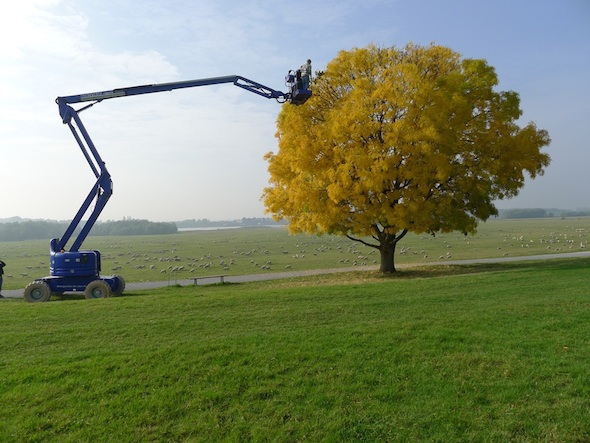 
His studio, then, becomes a place for experimentation and for generating new ideas. Before we are guided through that process, Sailstorfer shows us some photographs and moving images documenting his site-specific outdoor installations: his recent work Antiherbst, performed in 2012 for the Emscherkunst Biennial in the Ruhr region, saw the artist painstakingly collecting, painting and refastening fallen leaves back onto a tree in Autumn, in order to simulate a premature Spring revival. In another of his ‘rural’ pieces, 3 Ster mit Ausblick (2002), Sailstorfer assists in an act of ‘cabin cannibalism,’ feeding the rotting wooden walls of a small chalet to the fireplace inside it over the course of a day, until nothing remains on the landscape but the burning stove. These pieces, strangely architectural in their tone, deal poignantly with cycles of natural decay and human interference therein. Conceptually, they become guiding threads for our understanding of Sailstorfer’s work throughout the visit. Though his works vary greatly in form and material, there is a sense that the artist has a penchant for the absurd, bringing together strange elements to create a fully visceral experience for his audience. 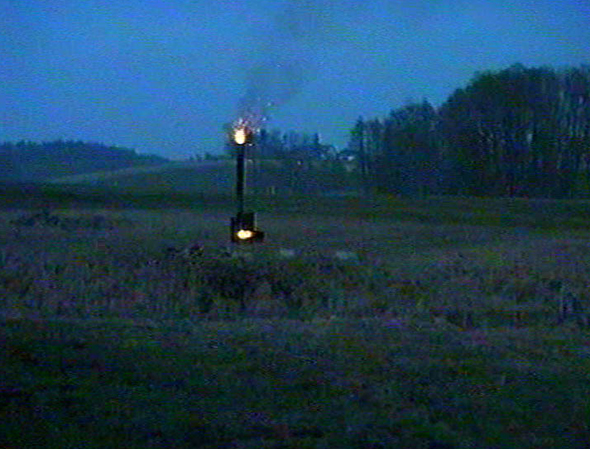 First, he lets us take a look at the site models for his recently opened exhibition Freedom Fries am Arbeitsplatz at Galerie Perrotin in Paris. The title of the show references Joseph Beuys’ 1977 Honigpumpe am Arbeitzplatz installation at Documenta 6, which pumped honey into tubes throughout several rooms of the main building, amongst the festival’s attendees. In Sailstorfer’s playful twist, he has created a large Statue of Liberty drill out of an old replica he found at a GDR paraphernalia market in the former East. The Statue’s torch is provocatively thrust into the gallery wall, slowly drilling through into the adjacent room over the course of the show.

The exhibition is tied together by his series of copper maze canvases. Sailstorfer kindly unwraps one of the works, destined for Paris, to show us his technique. He has screen-printed several maze puzzles downloaded from the Internet–some of them in the form of popular characters, like Hello Kitty and Iron Man–onto canvases painted with copper primer. Spontaneously and without premeditation, Sailstorfer attempts to solve the maze in one go using an acid solution. The result is almost geographical: green landmasses appear on the copper canvas, the topography rising and crystallizing in spots where the oxidization was most successful. 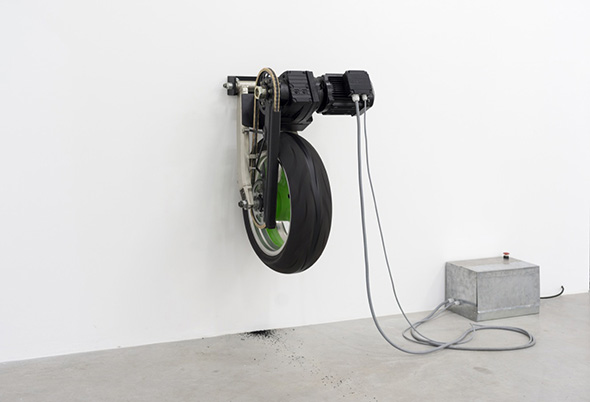 After enquiring about the mechanics behind Sailstorfer’s Statue of Liberty drill, we are invited to visit the workshop in the space next door to his. Run by Bernd Euler and company, the workshop has an impressive range of tools, including a full CNC mill for machine cutting intricate digital designs. In the workshop we come across the remnants of one of Sailstorfer’s older works, Zeit ist keine Autobahn (2008). It’s a normal car tire, fastened to a motorized engine. In the gallery space where the work is shown, the tire rotates at full speed against the pristine white walls. As the tire begins to wear away, the room is filled with the pungent stench of burning rubber. This piece – a conceptual predecessor to the more recent Statue of Liberty drill – pushes the limits of what a sculpture can be, using the piece to evoke memories associated with these particular and familiar smells and sounds. As with many of Sailstorfer’s works, he manages to artfully transform these kinds of everyday occurrences into something quite jarring. 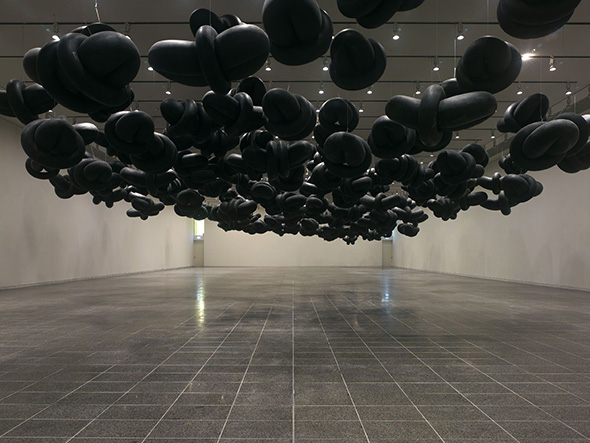 During the visit, we catch glimpses of works in progress throughout the studio. Most of them are unfinished or purely experimental but they say a lot about Sailstorfer’s creative process. He has a thrilling curiosity for the sculptural possibilities of commonplace, found objects: rubber tires and inner tubes, machine scraps, flea market kitsch, and elements of both architecture and nature are all worthy of inclusion in his inspired installations.

As the finale to our visit, we are treated to a display of pyrotechnics as we watch documentary footage of his Raketenbaum work from 2008. In a secluded field near his father’s farm in Bavaria, Sailstorfer attached compressed-air cylinders to the roots of a few trees that, as he described them, were “somehow in the way.” Once detonated, the trees suddenly launched several metres into the air, some of them remaining mostly intact. Though there were only a few people present to witness the act, the documentation is powerful. Like much of Sailstorfer’s work, there is something at once commonplace and unnerving about this piece. The routine act of removing old trees gets reinvented into a game of missile launching, an act of literal uprooting in the fields of his youth. Sailstorfer’s works always have this contingent element, open to the possibility of failure, but the outcomes prove all the more formidable because of it. 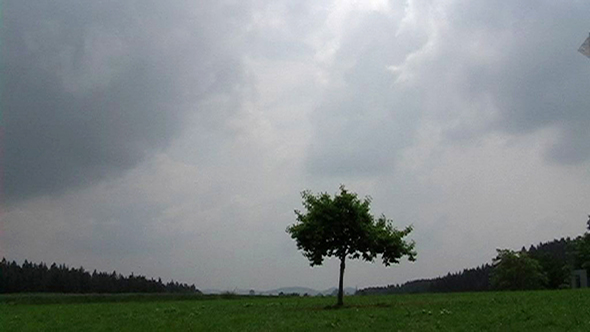 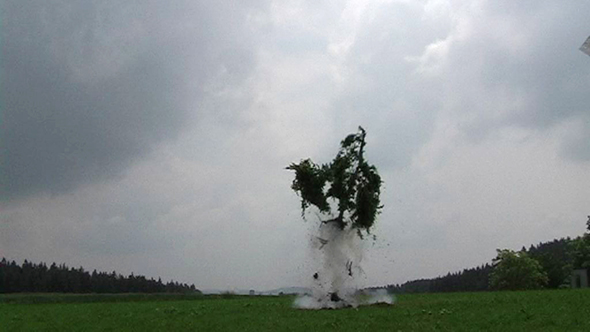 Alison Hugill has a Masters degree in Art Theory from Goldsmiths College, University of London. Alison is the Arts & Culture Editor of Review 31 and is based in Berlin.