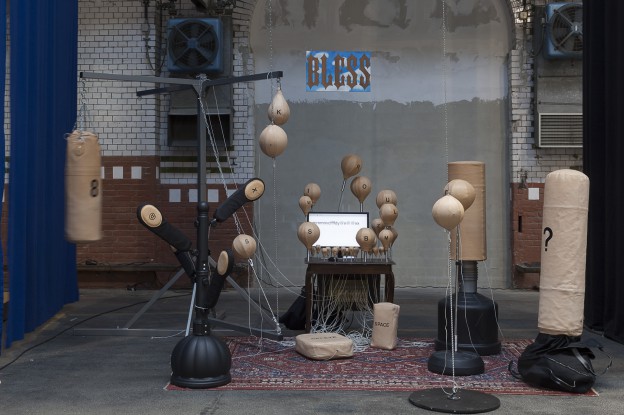 As part of their Bazaar within Art Berlin Contemporary (abc) this year, New York’s Artists Space has organized a series of lectures throughout Saturday afternoon, meditating on the influence of the internet on artistic production and ways that one might reconcile value and desire in an epoch where such ‘wants’ are increasingly taboo. Certainly, the lecture series within the program of an art fair is nothing novel, but what Artists Space is putting forth at abc is a different rendition of the model: one that is imminently self aware of the structure in which it is taking place.

In conversation with the berlin art journal’s Alexander Forbes, Artists Space curator Richard Birkett says, “We were always thinking about the relationship between a local context and local production within the global network of cultural production.” Indeed, such themes of what it means to be from and produce in any given city or more abstract locality play a major role within Artists Space’s Bazaar and the lecture series. However, more pointedly, Birkett suggests that, “Today it’s a bit unclear as to what can be called alternative.” For example, what does it mean for an artist run organization, one that is at face non-commercial to exist so prominently within a commercial market such as an art fair.

First up on Saturday will be media theorist Arthur Kroker, who specializes in what might be called techno-theory, followed by e-flux founder Anton Vidokle. Kroker, who will present via video stream from his and his wife’s research institute in Victoria, British Columbia, will speak about the implications of the abstraction of relations in post modern society brought on by the internet and other network-based models of interaction on culture and artistic production. Vidokle’s talk will focus more specifically on e-flux’s controversial efforts to acquire the “.art” internet domain. “They want to demarcate a space that isn’t confined by some corporate motivation,” Birkett says of their efforts. However, others have contended that to place such a responsibility or even deterministic ability in the hands of one group runs the risk of too extensive power for said group to create boundaries around “what is culture?” With out a doubt, Vidokle’s offering will be the most heated of presentations in the series.

In contrast to the intangibility of the internet, Antonia Hirsch will present the latest developments from her “Intangible Economies” project on Sunday afternoon. Hirsch seemingly seeks to hole out a niche in which desire and economies of desire can distinguish themselves from a reductionist view of commodification and fetishization or perhaps where those boundaries lie. What does it mean to want or posses cultural objects or more directly intangible cultural and experiential value? How to we reconcile such abstracted value systems against a social economy built on and maligned for its derivative markets in which its very monetary base in all but thin air? Berlin-based artist Patricia Reed and critic and writer, Jan Verwoert will also contribute to the afternoon’s discussion.

Of the two themes’ confluence, Birkett says, “On one had, we’re thinking about network media and the way in which art functions online: more abstract notions of image and idea based economies, while Antonia is simultaneously thinking about economies based on affect.” The result is something of a full circle: I want. I do. But, can I still feel? And, if so, is that worth something as well?

The full program of Artists Space Lectures will take place within abc at the Bazar. Arther Kroker begins at 2pm on Saturday, followed by Anton Vidokle at 4pm. On Sunday, Antonia Hirsch begins at 2pm, followed by Patricia Reed at 3:30pm, and Jan Verwoert at 5pm.