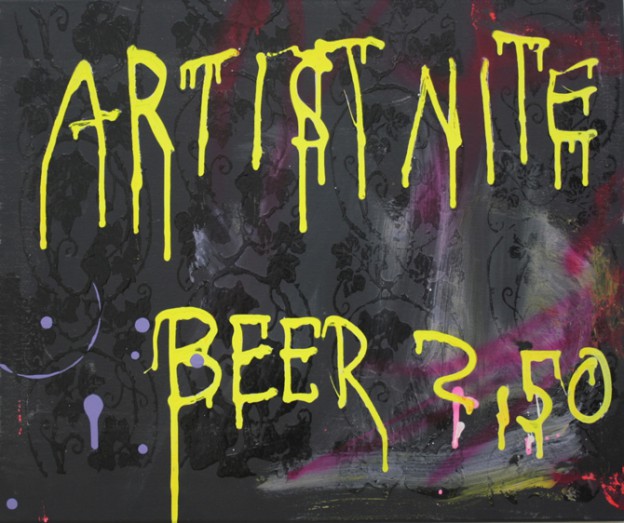 When asked why there was so much alcohol flowing through the art world, a well-known art critic who prefers to remain anonymous answered: “My boozing has been bumming me out, but if I quit drinking there would officially be no more perks to my profession and that’s too depressing a fact to face sober.” Drinking and art seem to belong together, for many drinking even seems to be a means to endure, but not a means to create art. Here, however, comes a story on how drinking became the initiator of a great series of works:

For two years now, the King Size bar in Berlin (the name of which defies its spatial dimensions) has been the home of the “Artist Night”, brought to life each Wednesday by its maître de plaisir, gallerist Martin Kwade. In summer 2010, Kwade was looking for a means to make some money “to put into my gallery“ (devoted gallerists know how things work, you don’t get money out of your gallery, you put money in) and asked Stephan Landwehr, one of the bar’s initiators, if he could tend the bar. This is what he got for an answer: „You know so many artists, why don’t you organise an artist night?“

So Kwade sat down with the King Size team (the bar is a brainchild of the people behind the Grill Royal restaurant) to make a plan. “It took 10 minutes and we had the thing organised and decided: we’ll start this Wednesday.” Wednesday it was, and Wednesday it has been ever since. Each Wednesday night is “Artist Night”. 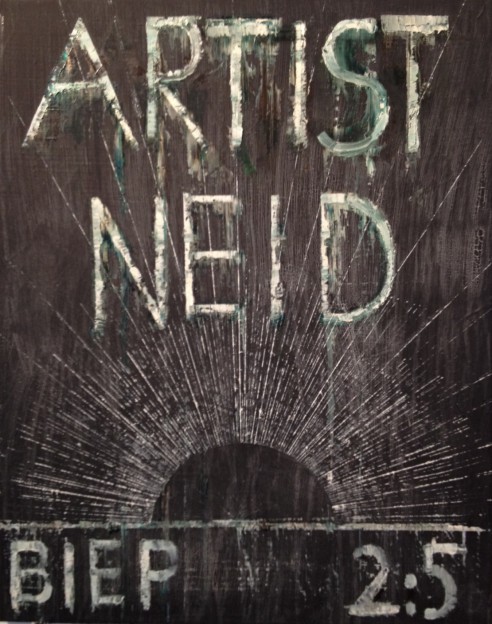 Now, artists coming together to drink and party at a bar is nothing unusual, and it has got nothing to do with art production, right? But in this case it has. Since its inception a work of art has been produced to go with each Artist Night, and this is how it came about: “I went to check out the bar, and I realised that it was pretty expensive”, Kwade recalls. “ So I said to the King Size guys, look, with prices like that you will never get any artists to drink at this place.” So they decided to introduce a special artist-friendly price policy: beer at 2,50 euros instead of 4. “To announce this, we needed a sign. I asked an artist friend if he would make me one, he answered no. Same with a couple more artists. But then, Anselm Reyle agreed to make one. He made the first Artist Night Beer Sign ever, and by now artists are almost begging me to be the next to make one.”

From the beginning, the idea of Artist Night was to have only artists organising it; artists tending the bar, artists spinning the decks, artists playing the bouncer at the door. In the beginning, Kwade had a hard time finding people for those jobs, but now that Artist Night has become a favourite on the art scene’s party calendar, they all are more than willing to help. Even gallerist Bruno Brunett of Contemporary Fine Arts was once found tending the bar, maybe prompted by the atmosphere of conviviality and the feeling of belonging that unites the crowd at King Size, and the DJ line-up has included curators, gallery assistants and art editors such as Monopol magazine’s chief editor Holger Liebs. The problem is, however, that artists are no bar professionals. “In the beginning we had two artists behind the bar, now we’re teaming one artist with one King Size team professional – Artist Night guests are very forgiving, but after all, we still have to serve drinks”, Kwade explains. Artist Night is fun, but it should not be forgotten that it is also hard work, for Kwade, and for all the others who make it happen. Artist Klaus Jörres, who took care of the door for almost two years, recently asked for some time off, and King Size resident bouncer Frank Künster has stepped in. 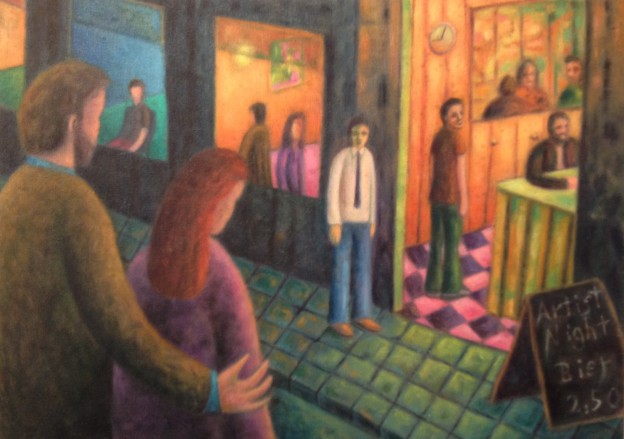 The sign announcing the special Artist Night beer price has become an indispensable element of the whole affair. By now more than 100 signs exist, made only by the very best of Berlin based artists, among them Marcel Eichner, Gregor Hildebrandt, Jen Ray, Alicja Kwade, Michael Sailstorfer… more than a hundred variations of one theme, as the sign always has and always will say the same: “Artist Night. Bier 2,50 Euro”.

On the occasion of abc and Berlin Art Week, the King Size bar schedule is packed with special nights, kicking off with gallerists Alexander Levy and Alexander Duve hosting yesterday night. As a visitor of abc, sooner or later you will inevitably end up at this place. When you do, go with the flow, let yourself be lifted by the crowd that fills the bar so densely you will not get your feet on the floor anyway, have a beer or two or three – and be sure to watch out for THE SIGN!

A catalogue of all Artist Night beer signs produced to this date is currently in production, and an exhibition is planned to follow. For further information, see the Artist Night Facebook page.