Bpigs highlights artists and their work in progress just before their openings. An inside look into the studio practice and many other irrelevant thoughts that go through an artists mind before their proverbial 15 minutes of fame. Artist-to-artist, Berliner-to-Berliner, these are their stories. Revving up for art berlin contemporary, Sinta Werner found time for us to visit her studio while she prepares her work for the alexander levy booth at the abc. 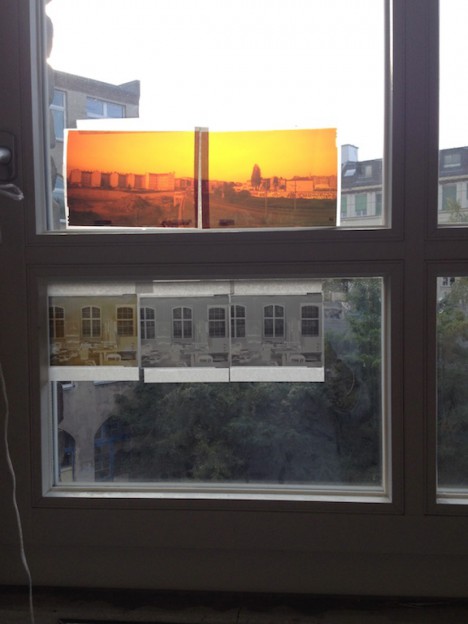 Sinta Werner situates her work between the 2nd and 3rd dimensional. They are site-specific, and blur the divisions between sculpture, architecture, and image. We could write more about Werner’s practice, but rather than regurgitate, let’s let her talk about it in her own words.

Are there certain goals that you set for yourself, or your audience, in regards to the conception of an exhibition from start to finish?

There is always a goal to set up an interesting show, something innovative. It depends on the profile of the show and how much influence you have on it. If you are doing a solo show, it all depends on your own ambition. So I take that quite seriously. The goal in that case would be to try out something new, to take on a new challenge. So, I think that is my goal, if I have that in my hands and there is time to prepare something, to do a new piece.

Have you ever had to change that goal, if it was potentially unsuccessful? In other words, have you ever required a backup plan to execute, or for you, is there only one way?

There have been some situations where, in the middle of installing, I had to change plans. But mostly it turned out the way I had planned. Normally in the face of developing the idea, there is a lot going on. A lot of different ideas I follow until I make up my mind, and then I plan it through quite precisely. If I do installations, I have to order the materials in advance and there exists not so much room to change the idea, so then it is really doing whatever my initial plan was. But there were one or two occasions where I had to completely change what my plan was. The situations were exciting and stressful at the same time. When it doesn’t turn out the way you wanted, you really have to work hard in order to get something finished.

Are there any ‘obsessive compulsive’ behavioral traits that you perform before one of your exhibitions, a type of a good luck ritual?

No, I think it’s just the normal rituals like dressing up. It is usually before the opening, two hours prior, when it is time to simply get some food.

Do you ever experience social anxiety at an opening of yours, and or, how do feel when you see strangers look at your work?

I wouldn’t say I have social anxieties, but there are moments at the very beginning of an opening, the first half hour when I am often worried there won’t be anybody. Well anybody I know, so it can be a bit stiff. I don’t like these moments. But sometimes that forces you to meet new people, which can be good. I like to watch people when they are watching my work. You have the opportunity to be a spectator as well. They came to see your show and you can watch their reactions. 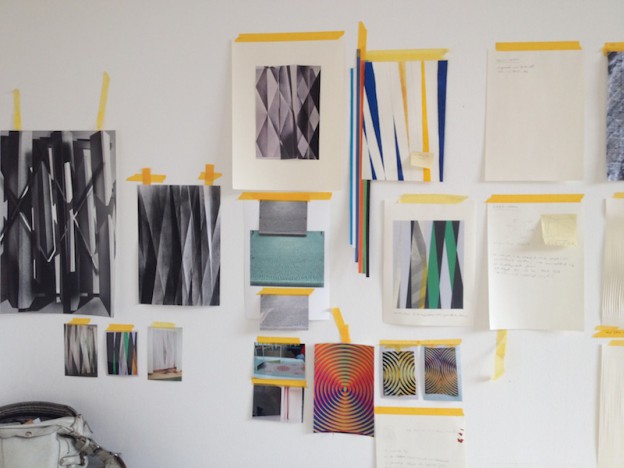 What is the funniest comment you may have overheard during these scenarios from someone who may not have known you are the artist?

I can’t remember anything bad in this type of situation. I think if I am next to my work, I am quite visible as the author of that piece. Sometimes I am not standing right in front of the work if I don’t feel like advertising.

Is there a pre-exhibition food you like to eat, as in comfort food?

No, nothing specific. There was an opening last week and I had spaghetti with pesto and a lot of garlic which wasn’t the right choice.

Are there certain clothes you like to wear for the opening night?

Not really, sometimes I really like to dress up, and it becomes quite festive, red lipstick, etc. And sometimes I will wear everyday clothes as well, just to feel comfortable. It is like a game, I am not always so dressed up, so to do that becomes a way to celebrate the event. 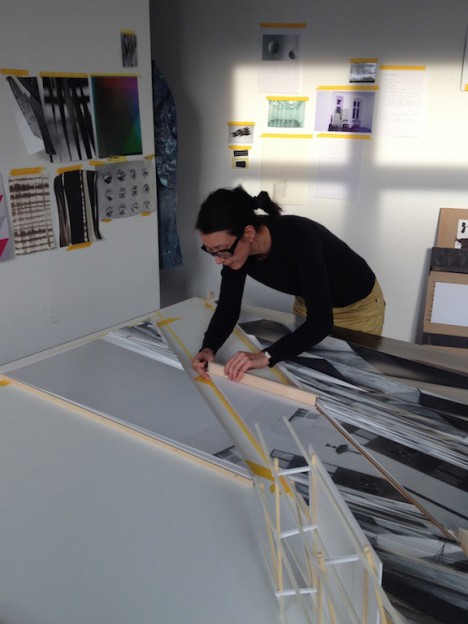 When do you usually arrive to one of your openings?

I tend to arrive half an hour late, as I hate this first half hour. However I also regret it because I miss journalists and I miss friends. But I always try to push myself to arrive on time. Sometimes I have the impulse to continue to work, to re-arrange things or to clean something.

Is that perhaps because you feel something is not finished, or that you could always keep modifying the work?

It feels as though it’s too quick of a change. I am normally a worker, cutting up wood and generally being very hands on, and often there is not time to make the change. To become the intellectual person who looks neat and gives clever answers. Not to mention the change of pace. You are usually rushing in the end to get things finished, and this is what you have to change. You have to calm down, be present and focused.

Does there exist a certain time frame for you in terms of execution when setting up a show from start to finish? Do you set a schedule and have certain limits in mind or does it depend on the space?

It really always depends on the deadlines, how much time I can take to prepare. I think if there is plenty of time, I might not go straight to developing the idea and preparing the show. I may have that concept in mind, but can consider alternatives when an idea pops up. There are times however, where you have to follow a schedule. At the moment it is quite intense for me. There was a show last week at Neue Berliner Räume, and another opening on the 11th of September in Prague where I am doing a residency, and now the abc. Everyday is planned through. For the past three weeks, and the upcoming two weeks, I have a very tight schedule to get it all done. 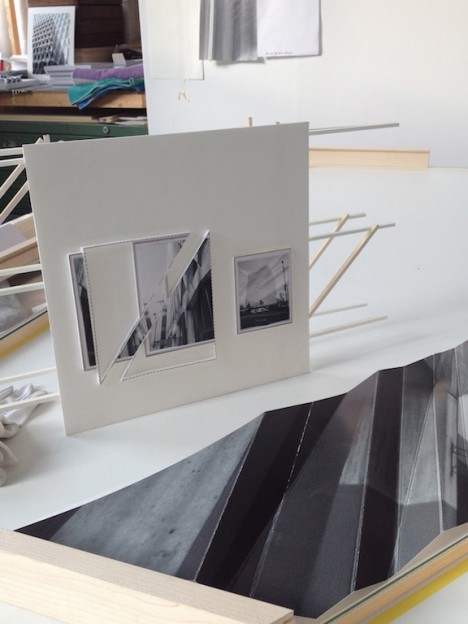 Tell me about the work you are now preparing for the Alexander Levy booth at abc.

It is quite a restricted place I have there for a solo presentation, because there is only this one wall, which is 4 x 4 meters. At first I thought of doing an installation there, but that is difficult if there is not a room situation. So I came up with something in between a collage and an installation, an object on the wall that I developed for that opportunity. I am showing one collage: Überschreibung des Himmels, which is a folded collage. I am working with an image of a house encased in scaffolding, that has wrapping over the scaffolding. I am working with these geometric structures that the scaffolding evokes, and folded the whole photograph following these lines. Scaffolding is something that re-appears in the architectural design of the abc exhibition walls. What I have done, as I work between the 2nd and 3rd dimensional, is tried to create mistakes or illusions in between those two dimensions. Here I have taken a picture of the folded collage, to capture all the shadows of the folds and reprinted it in a larger scale. Then I have refolded that, but not repeating all the same folds, so you have folds that are there in the real, and folds that are just the illusion. It’s a way of geometricising the sky. The building becomes quite atmospheric; a being that has power over the sky. There is a second piece that resulted from a collage that I’ve deconstructed afterward, and it follows a similar principle. It is an image of a parking garage in London. The concrete façade has a lot of strong geometric patterns that inspired me to fold it again. So here, once more, I continue the process of folding, photographing, and folding again. But now I have used it as a base material for an installation, which is this Photoshop-installation that I have been doing. I am transferring the 2D from Photoshop into the real space, using the polygon lasso selection tool. The editing tool I am using is the horizontal flip, and the selection tools I build from LED strips, so it’s blinking. That work is titled: Optische Abkürzung II. They are a comment on digital imagery, how we are constantly overwhelmed with such images. The art fair also is a place of overwhelment, so I want to command that with something that is really aggressive, these blinking lights. With all this flat imagery, you wouldn’t notice it at first glance, it may be confusing, as in, what is Photoshop doing here? Something that wouldn’t fit there, but some of it would quite perfectly fit in a situation like that. The lights help to create the illusion of flatness, which is what I am always concerned with because that illusion is so strong. They are really destroying any spatial association. The lights serve as a border between a real space and a visual space. The things in between the selection triangles are not supposed to be there, so that becomes a manipulated piece of realty.

What book are you reading right now? Do you have time to read?

If I read, it is mostly novels. I am reading a book from Paul Auster, Leviathan. It’s a nice book, a classic.

Text and pictures by Cyrus Smith