For its last pre-interview, abc’s contributor bpigs managed to crash the artist Ingo Mittelstaedt’s installation at Galerie koal to capture few words while he prepares for the battle.

Ingo Mittelstaedt is not a mediocre photographer. His concern with the aesthetics of display and the re-interpretation of the photographic process creates in his work a wonderful dialogue between what we see and how we see it. Let’s hear what he has been up to…

Are there certain goals that you set for yourself, or your audience, in regards to the conception of an exhibition, from start to finish?

My work starts with an impulse, a feeling. Then it becomes all about getting it into space. Step by step I specify the feeling and a concrete idea emerges.

From the beginning this feeling is the motor that keeps you going trough the different stages. If in the end I see this feeling transformed into an exhibition, I would say the goal is accomplished.

I don’t think about Plan A or Plan B. A project is a sum of a lot of things. It’s a flexible system, in which you can replace parts during the process. Eventually I decide for one version, knowing there could have been another one. But I think it is important to make a decision and go with it, at least for a while.

Do you have any “obsessive-compulsive” behavioral trait that you might perform before one of your openings? Or some form of good luck ritual?

I try to not be involved in the exhibition at the day of the opening. The ideal thing would be to finish installing one day before. The next day you can relax or work on a different project. I think it’s good to take a step back and distance yourself a bit from the work you’ll be showing.

Have you ever been in a situation where you overheard someone talking about your work, good or bad, but they didn’t know you were the artist?

If somebody says, “I hate it”, it’s a form of reaction, an emotion. That is something. I don’t want everybody to like my work. I know that’s not possible. I think it’s very normal that people discuss my work. It makes me happy. I mean, I am not happy if someone dislikes my work, but it’s always a good way to start a discussion about the art rather than “Oh it’s so nice, etc” However I don’t remember any unpleasant situation where I over heard somebody talking.

When will you typically arrive at one of your opening exhibitions?

That always depends on the venue. It can be up to half an hour to an hour before. Sometimes you so are involved up until the last minute, it feels like you haven’t left the exhibition space for days.  Is there a pre-opening food you like to eat? A form of ‘comfort food’?  Maybe eating something good at home, or the place I am staying? That would be the best. But I don’t seem to think about eating in these situations. It’s more a functional thing, which keeps me going. Thinking about, good food, needs time. 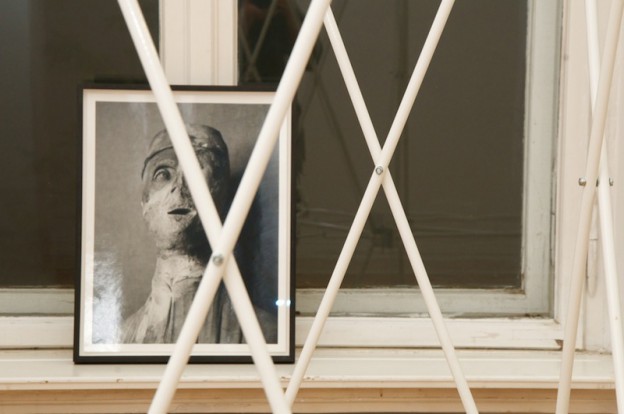 Do you have an outfit you like to wear, or certain clothes you will dress in for your openings?

Just clothes I am comfortable in.  Let’s say you were given a solo show today. Do you have a set time frame that you give yourself to produce something? Or does it depend on the space?  It’s depends a lot on the project and of course on the space. There are times you plan a project far in advance and sometimes it can be 2 weeks from having an idea until installing the work. It also depends on whether I create completely new works, like I am now for the show here at Galerie koal, or if I exhibit art that has already been produced.

They are planned as two separated projects. At Galerie koal I am showing a new body of work: photos and a special set up within which they are displayed. I began to reflect upon aesthetics. What kind of aesthetics I prefer and what kind of aesthetics I consider disturbing. I’ve used supermarket leaflets and integrated them into my photgraphic practice, just to see what happens. So the show at the gallery is going to be exactly about this process.

At the abc I will exhibit a large pedestal work for the first time. On the pedestal are photos, which seem to show something they are not showing. Found objects that appear to be constructed, but they are not. Books, documents, found images and large structures that come from mobile trade fair architecture. Typically they house huge banners. However I use them as empty displays. Lending themselves more as a piece of furniture. The pedestal work refers to classical situations in a museum, but at the same time it also undermines them. Both projects are similar in that they play with a certain expectation toward presentation and representation connected to photography. In the end nothing is like it seems to be!

What book are you reading right now, or do you have time to read?

I have two books with me, but I may not have the time to read them.