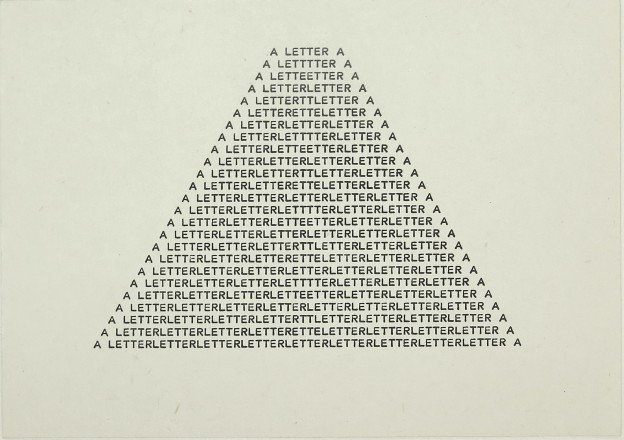 Historical works by the Berlin artist have been selected and arranged to offer an overview of her production, focusing especially on her involvement in the Mail Art movement.
The table displays show a wide selection of her “postcard” pieces, produced in mailable size.
The connection with the city of Berlin and the former use of the Station Berlin (an old post office deposit), offer the perfect environment to re-propose this exhibition to the public.
The pieces presented are all part of her series of Zyncographies editions, produced between late seventies and eighties.

Ruth Wolf-Rehfeldt began to write poems, draw and make collages in the early 1970s.
Her first typewriter works, which she entitled “Typewritings” and whose diversity defies description, were produced on an Erika typewriter. With impressive precision, she arranged letters and punctuation marks into pictorial elements, often creating a three-dimensional effect. The humour and finesse of her work made Ruth Wolf-Rehfeldt a sought-after contact person in the network of international artistic exchanges.

Each of her works consists of an original – either an individual typed work or a series – and of further reproductions in the form of carbon copies, postcards or prints in formats ranging from A5 to A2. These works can just as easily be situated within the context of conceptual art or visual and concrete poetry as they can in the domain of Mail Art.