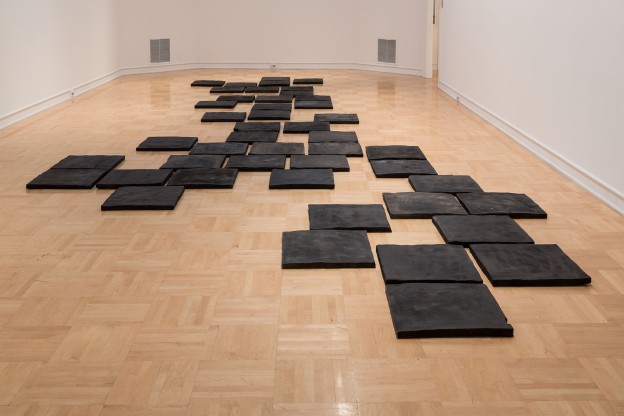 Meyer Riegger presents for the duration of abc 2015 an installation including partially new works by Katinka Bock. For her sculptures and installations, the artist employs primarily materials such as stone, clay, sand, chalk or metal. She also makes use objets trouvés, which she minimally manipulates.


These therefore are very basic, but also everyday materials that reveal a certain dynamism of their own: they are in equal measure both the shaping substance, but also the form-giving material, finding their ultimate condition through the manner of their deployment. The material is exposed to natural and artificially created processes of deformation and decomposition, with the elementary properties of the chosen material – such as attraction, repulsion, expansion and contraction – playing a decisive role. Space and time become means of imparting form, since objects emerge that reflect traces of the given space or of a certain phase of time in the life of the material.

Katinka Bock arrives at reduced forms which, in interplay with her largely poetic titles, imitate objects of the day-to-day world. This gives rise to a figurative element. Often, human dimensions are reflected, at times clearly visible, on other occasions not so apparent. Fundamental to her ongoing thematic concerns are structural investigations of social relationships and of culturally defined spaces. She is intensely interested also in natural scientific matters, such as time, space and distance. Individual objects or entire installations explore mathematical formulae or the balancing of diverse forms. For abc 2015 also, the artist has created an assemblage composed of a range of objects which subtly set material and form into relation with one another and play with the given space.