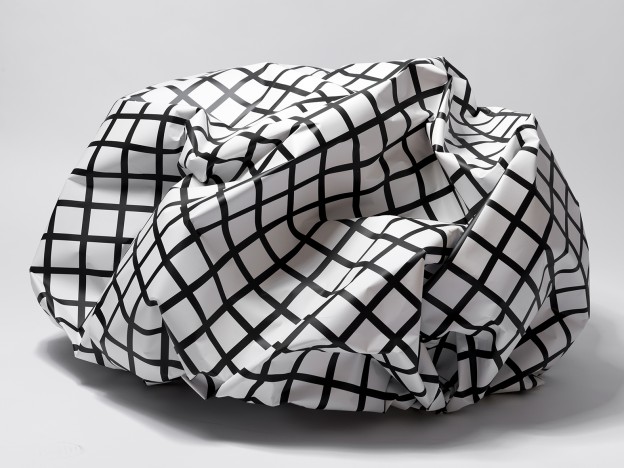 
Esther Stocker’s modernist form language manifests itself in a variety of artistic media, addressing a theme that dates back to the abstraction of painting in the early 20th century, when Kasimir Malevich’s Black Square on White (1915) transferred painting to the non-representational realm and introduced a spatial dimension. The departure of painting towards a three-dimensional approach that goes beyond figurative representation created a wider range of possibilities to view art as a holistic experience of philosophical issues.

In her works, Stocker uses diverse media to address the resumption of a Malevichian discourse on abstraction geared to the theory of space. The artist systematically checks the validity of the two-dimensional logic of imagination in painting and breaks up its spatial limitations. By using black-and-white patterns and textures, she releases the viewer from the perception of colour and draws their attention directly to spatial structures. Stocker’s artistic work deals with the juxtaposition of painting, photography and sculpture as an interaction between theories that encompass all spatial dimensions.

In her most recent works, black squares in grid patterns are transferred in a repetitive form onto the surface of objects that are suspended in space. By folding and creasing the original paintings on paper, she creates “clusters” or reliefs on the wall. The process of creasing the black-and-white grid patterns creates a distorted array of variously arranged squares, thus also alluding to instances of Op Art and subsequently transferring them into the three-dimensionality of space.

The inspiration for this series of objects came from mock-ups which Stocker was using in an attempt to crease space in order to disrupt the strict geometry and create a contrast to the standard structures and the form language of her paintings. The shape of Stocker’s cluster sculptures are reminiscent of crumpled pieces of paper which used to be flat before they were disposed of in this form. The artist thus addresses the active process which aims to distort the information of the sheet by turning the two-dimensional sheet of paper into a three-dimensional shape with a different volume.

In addition to the objects, the artist also adapts her medium transfer technique using photography. In this process, the three-dimensional creased shapes regain two-dimensional properties through the dispositif of photography. The artist thus reproduces the folded paper formats and objects in order to visualise the rupture lines of their three-dimensionality on a photographic surface. These works are therefore related to the spatial objects and yet can also be regarded as independent pieces within the context of Stocker’s other photographic works.

The object sculptures are arranged as a mobile, which produces moments of movement as it hangs in space. Depending on the viewing angle, Stocker’s works thus place various aesthetic demands on the viewer, which are of less relevance in the photographs due to the fixed viewing angle of the camera. The black-and-white aesthetic intensifies the focus on space, explores its basic structures and uses modernist terms to probe the impact of a space-time axis on the scope of movement.