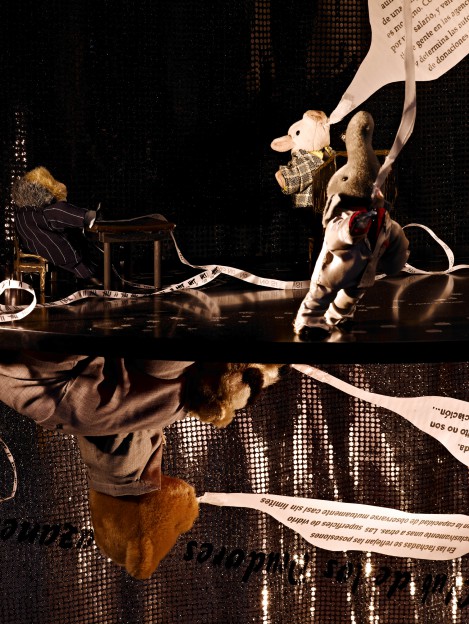 For this year’s abc Berlin, Alice Creischer has prepared an installation that debuted in 2000 during the World Exhibition in Hannover.

The first act takes the viewer in the French National Assembly where Pierre-Joseph Proudhon, a supporter of socialism without violence, unsuccessfully proposes the communitarisation of banks. The second and third act are sound plays consisting of a collage of passages from Karl Marx’ „18. Brumaire des Louis Bonaparte“ and Sohn Rethel’s “Aufzeichnungen aus dem mitteldeutschen Wirtschaftstag” respectively. During the Third Reich the most powerful German Banks collaborated with the Nazis in order to communitarise their debts. As Proudhon’s suggestion is turned upside down, so is the play, with the scene now playing under the table.

The contrast between the casual setting of a puppet play and the heavy subjects discussed in it makes Alice Creischer’s work an installation to watch.