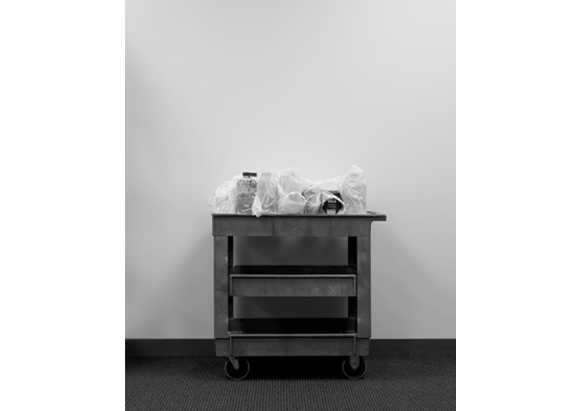 “I was once lonelyness”

I Was Once Lonelyness is a group exhibition by Jose Dávila, Moshekwa Langa, Joel Morrison, Hayal Pozanti, Mary Ramsden, Samara Scott, Beto Shwafaty, Michael Staniak and Asim Waqif that looks at how contemporary artists are utilising differing languages of abstraction to bridge material and immaterial space. In an age where digital platforms proliferate, we mediate a unique moment in history where we occupy and move between physical and immaterial realms. Artists are brought together from each of the world’s continents to explore how this condition is expressed in painting, sculpture, installation, works on paper and photography.

Keyser’s paintings deviate from the main road. They mine the sideroads and the edges of our minds and return to what consciousness has dropped. The pictorial is indivisiable from the material, yet all the while maintains a playful and deviant relationship.

Minimalism always implies reduction: In order to minimize something, there has to be something to be reduced first. Adding and subtracting, or accumulating and reducing are the fundamental acts here. Reduction may – as is the case in American Minimal Art – be intentional from the outset, or may occur gradually as a result of a sequence of steps in a work process. With Charlotte Posenenske, Julian Fickler, Olaf Holzapfel, Michael Reiter, Gedi Sibony, Martina Wolf

In a new series of works which depict basic goods on the West End Church’s food bank shelves, Myles overlays each canvas (each of which are the exact dimensions of Myles’s studio door in Glasgow) with screen-printed ‘true-grain’ film. The true-grain bears partial images of photographs from his trip to the former Forest Showroom, as well as to Wines’s New York home, to the archives of Best, and to a wedding chapel inside a diner that Wines recently designed in Las Vegas.

“Can’t you see how big those snails are?”

Can’t you see how big those snails are? is an installation of film and language alongside architectural and sculptural works. This exhibition brings together a disparate group of works which all perform, question and complicate the relationships existing within the problematic binaries of: human / nature, organic / technological, male / female, mind / body, self / other, whole / part, right / wrong.

“Ladies and gentleman, by way of introduction, this is a film about trickery, fraud, about lies. Tell it by the fireside or in the marketplace or in a movie, almost any story is almost certainly some kind of lie. But not this time. This is a promise. For the next hour, everything you hear from us is really true and based on solid facts”.