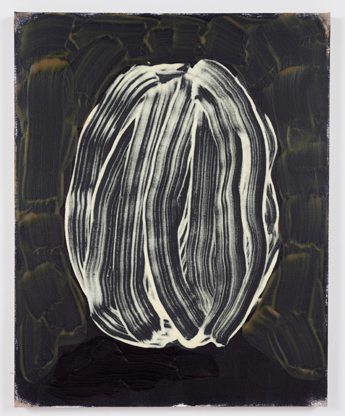 The representation of the human figure is one of the oldest pictorial forms in art history. Be it in sculptural form or as a painting, the ‘classical’ portrait served to present the person portrayed or to remember him or her, thus according the person a particular honour in the private or public sphere. Having originally emerged for memorial purposes, the portrait is a form whose task and significance can no longer be univocally stated – and at the same time the manner of portrayal and the formal language employed have opened up and changed. Against this background, the group exhibition ‘Hermann comes shyly in’ shows a wide variety of diverse contemporary positions adopted by a range of artists on the broadly understood topic of the portrait and portraiture.

After 15 years in the great space under the railway at Holzmarktstraße/Jannowitzbrücke, Gerhardsen Gerner is pleased to inaugurate its new space in Linienstraße 85 with a solo exhibition by British artist Julian Opie.
Julian Opie’s work has generated icons of contemporary art and has been shown internationally in all major institutions, including shows at Kunstverein in Cologne, Hayward Gallery and ICA in London, Lenbachhaus in Munich, K21 in Dusseldorf, MAK in Vienna, CAC in Malaga and IVAM in Valencia, MOCAK in Krakow, Tidehalle in Helsinki as well as the Delhi Triennial, Venice Biennial and Documenta.

Zurier’s paintings often evoke a strong atmospheric character, suggesting phenomena from the natural world—the memory of a particular quality of light and colour from a specific location and moment. The title of the exhibition “East”, for example, refers to the eastern part of Iceland –Zurier has spent a great deal of time in Iceland over the past years– and is the point of reference for the group of four paintings titled Borgarfjörður Eystri – a town in the east of Iceland. The particular yellow in Late Summer suggests the colour of the nature in Iceland at that time of the year. Other paintings find their points of origin in locations such as Italy, like the painting Dust (La Verna). The title is a reference to the cloister of St. Francis’s at La Verna in Italy.

Known for her engagement with the history of architectural styles—especially the legacy of Modernism and of concrete constructions from the 1960s and 1970s, a style generally referred to as Brutalism—Isa Melsheimer’s works are expressions of her intense research as well as formal investigations. The artist acts as archeologist of often forgotten or neglected buildings, recreating their distinctive shapes both from her study and from her vivid re-imagining of the forms and the spirit of the structures. Even if the individual buildings are not all well known and therefore might not be immediately recognized, the formal language is familiar and has become a ubiquitous part of the urban landscape. Her work seeks to examine the connotations of the building’s historical and architectural context, and the ideological connotations with which its materials, aesthetics, and functions may be imbued.

“Life goes on without me”

The pictures represent dream-like scenes that seem to play out on and at the peripheries of family gatherings long since passed. They feature mainly female characters, sometimes alone, sometimes in groups. Some of the figures are reproduced almost naturalistically; others are subject to expressionist distortion. They bring to mind motifs from James Enzor, Edvard Munch, Marc Chagall and the early Lyonel Feininger, though both their form and their content are explicitly involved with the concerns of contemporary painting.

For what Bloch negotiates here in nostalgic garb and with innovative painterly means is a theme that has again become highly topical in the art of the present: that of the human form. But she does more than just explore the pictorial potential of various forms of representation. She also investigates the consequences of their physical juxtaposition and temporal coexistence, creating multi-layered genre pictures and portraits that move between perception, memory and fiction.