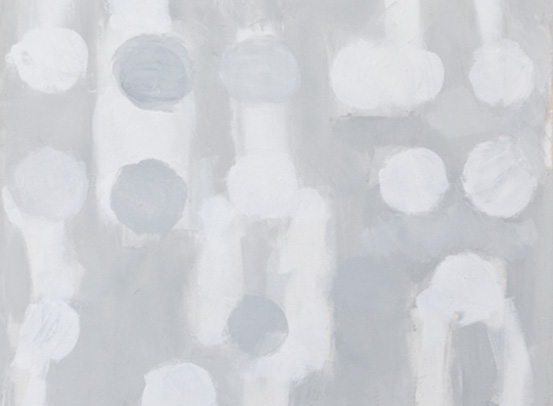 “Für Berlin” is the title of the current exhibition at Konrad Fischer Galerie Berlin presenting recent works by Jerry Zeniuk. The Konrad Fischer Galerie is proud to exhibit the work of Jerry Zeniuk, one of the world’s most significant painters and whose works are dedicated to the medium of colour and its visual as well as colour-spatial properties.

The subject of Jerry Zeniuk’s paintings is the art of painting itself — free from any narrative, illustrative or psychologized references. The pictures are characterized by an impressive visual presence and concentrate primarily on colours seeking to have an immediate and direct effect on the viewer. The paintings present the results of a long-lasting process characterized by permanent reviews and modifications.

Left raw or grounded white canvas or cotton is used by him. The compositions of his paintings evolve during the actual painting process. In a careful manner Zeniuk applies one colour after another. Once set, the colour influences the proceeding colours and colour values. By being over painted the colours’ effect and shape are partially changed in order to produce a well-balanced and pleasing image.

The Konrad Fischer Galerie is proud above all to present early works from 1969, which have never been shown before. Black, white and different grays are sprinkled onto the canvas at regular intervals into accurately placed circles. Jerry Zeniuk started to paint them after he graduated from art school. Later the young artist left them behind in New York, where they have been forgotten until just a few months ago. A selection of the paintings will be on view in the exhibition on the 1st floor.

“squares, sunsets in jerusalem and palette of colors”

Born in 1924, Noa Eshkol was raised on a kibbutz in Palestine. In 1954, she founded the Noa Eshkol Chamber Dance Group, which was based out of her home in Holon, Israel, and shaped by both the practice of dance and a disciplined communal life. In addition to their daily exercises, the dancers lead a strictly ritualistic routine – many spent decades living and studying with Eshkol. In 1973, when one of her principal dancers was drafted into the military during the Yom Kippur War, Eshkol suspended her work in dance composition and began creating wall carpets from found fabrics. For her first textile works, she deconstructed clothing and combined the material with army blankets as well as cloth military targets. Eventually the artist and her dancers began procuring fabric from kibbutzim and clothing factories, which Eshkol pinned into arranged compositions that were then hand-stitched together by the group. So as to retain their readymade character, Eshkol specified that the originary fragments should not be cut. By her death in 2007, Eshkol had created a wide-reaching body of pictorial work, which remained in her home together with extensive writings, dance notations, and drawings.

Though Eshkol never made an explicit connection between the wall carpets and her work in dance composition, the seriality and symmetry of her textile works closely parallels the formalism and rigorous guidelines defined by her system of dance notation. Her interest in the laws of kinetics also becomes visible in the wall carpets’ graphic ornamentality and dynamic motifs, which can be perceived as isolated still images in a sequence of movements. In Hebrew, the word תקרה means both “carpet” and “story.” The narratives that ensue from this wordplay layer Eshkol’s wall carpets with autobiographical references as well as stories pertaining to the textiles’ origins and the history of Israel.